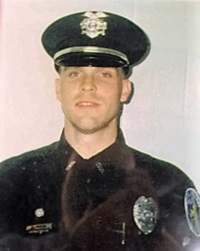 At 2 a.m. on January 4, 1998, Kenton County Police Officer Brian Kane pulled over a Volvo on West Fourth Street in Covington for suspicion of driving while intoxicated and running a red light.  During the initial investigation, the officer found the driver, Shawnta Michael Robertson (20) of Cincinnati, to be intoxicated and in possession of marijuana (both misdemeanors in Kentucky).  Though it was unknown to Officer Kane at the time, Robertson already had three arrests in Hamilton County for Corruption of a Minor, Domestic Violence, and Grand Theft.

Robertson suddenly took off running down Fourth Street and across the Clay Wade Bailey Bridge.  Officer Kane broadcast that he was in pursuit at 2:30 a.m. and Officer Partin drove to and over the bridge to a point ahead of the pursuit.

By this time, Officer Kane had caught up to Robertson who was resisting the arrest.  Officer Partin, seeing that Officer Kane needed help, vaulted over the concrete divider between the roadway and walkway portions of the bridge.  From his vantage point, he could not see that there was a three-foot gap between them.  He fell into the frigid waters of the Ohio River.

For the rest of January and into February, law enforcement, divers, Coast Guard, helicopters, boats, underwater cameras and sonar, etc. were used to search for Officer Partin in a search area that expanded to as far as fourteen miles over time.  Finally, the search was called off in the hopes the spring would bring thermal changes to the river and his body would be recovered.

During this time, without Officer Partin’s income, Mrs. Partin and her daughter were growing destitute.  She could not receive survivor’s benefits until his body was recovered.  Covington Police Officers sponsored several fund raisers to help defray Officer Partin’s family’s expenses.

By April 1998, hope increased daily that, with the river at 55 degrees, his body would rise.  Finally, on May 18, 1998, one week after he was honored in Police Memorial Day ceremonies, Officer Partin’s body was recovered near a boat on the Ohio side of the river, 1½ miles west of Anderson Ferry Road and 9½ miles from where he had entered the river.

Officer Partin was survived by his wife, Lisa Partin; stepdaughter, Sara Smith (11); parents and stepparents, Dave and Ruth Evers of Cincinnati and Louis and Karen Partin of Anderson Township; siblings, Angela Partin, Brandon Partin, and Joey Partin.   Visitation was held at the Allison & Rose Funeral Home in Taylor Mill on May 21, 1998.  Funeral services were held at St. Timothy Episcopal Church in Anderson Township, where he and his wife were married eight months prior in April 1997.  He was then buried in Highland Cemetery, Fort Mitchell.

Officer Kane subdued Robertson and charged him with the redlight violation, driving under the influence, and resisting arrest.  Robertson was released on bond the next day.

After being released on bond, Shawnta Robertson turned himself in on a probation violation warrant issued in Hamilton County and was jailed there until after the funeral.  He was then extradited to Kenton County to answer charges which by then included Manslaughter.

On September 18, 1998, a jury found Shawnta Robertson guilty of 2nd Degree Manslaughter and recommended six years in prison.  The judge sentenced him to six years.

After sentencing, Robertson continuously appealed his conviction.  He was still appealing during July 2002, when the Kentucky Parole Board granted him parole.  They asserted that they did so because the man “showed remorse.”

Hamilton County Court records indicate that between 2003 and 2010 he was cited and/or arrested for hazardous moving violations, Falsification, Obstructing Official Business, Resisting Arrest, Driving Without a License (3 times), Vicious Dog, Domestic Violence, Nonsupport, Menacing by Stalking, and Burglary.  It is reasonable to assume he has other citations/arrests in other jurisdictions and his location since 2010 is not known.

On May 8, 1998, Covington Police Chief Al Bosse, before his body was found, retired Officer Partin’s Badge No. 54 and posthumously issued him the city’s Legion of Honor medal.  Lisa later unveiled a new street sign for “Michael Partin Court” behind the Covington Police Headquarters.  Chief Bosse also retired the badges of two others killed in the line of duty; Patrolman Donald Ronnebaum, No. 47, and Patrolman Cleophus Eifert, No. 53.

If anyone knows of any information, artifacts, or photographs of this officer or incident, please contact the Greater Cincinnati Police Museum Director at Memorial@police-museum.org.

© This narrative was researched and revised on January 1, 2013 by retired Cincinnati Lieutenant Stephen R. Kramer with assistance from Jennifer Baker, reporter for the Cincinnati Enquirer.  All rights are reserved to them and the Greater Cincinnati Police Historical Society.