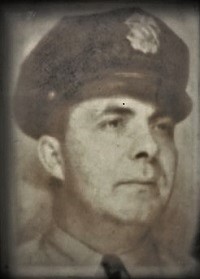 Clay was born August 30, 1906 in Indiana to Sylvester Victor, a church organist, and Catherine (Thines) Eifert, both of Ohio.  Before 1900, Sylvester moved his family to a church in Covington.

By 1930, Clay had married Catherine Barnhorst and worked as a Bricklayer.

Clay joined the Covington Police Department on December 7, 1936 as a Patrolman.

We do not know when Clay was appointed as a patrolman in Covington, but he began appearing in newspapers as a Covington policeman by 1936.

During 1940 his family, including Joan Eifert (9) and Paul Eifert (6), were living at 723 Dalton, three doors from his father and next door to his brother, Roman Eifert, and his family.

On February 8, 1946, about 6 a.m., Patrolmen Eifert and Larry Olliges responded to a report by the landlady, Mrs. Ethel Peace, of a drunken man with a gun on the 3rd floor at 114 W. 4th Street – about 1½ blocks from where Patrolman Eifert grew up as a boy on Bakewell and ¾ of a mile from his current home.

When the officers arrived, Patrolman Eifert ascended the stairs as Lucille Coatney was descending.  She repeated to the officers that a man had a gun.  As he climbed the staircase to the third floor, Grover Cleveland Rose (20), recently of Monroe, Michigan, appeared and shot him with a German Walther P-38 World War II souvenir purchased recently in Tennessee.  The bullet entered Patrolman Eifert’s chest and passed through the great vessels of his heart and his spine.

Then, Arlyn Bussell came running down the steps as Patrolman Olliges ascended them.  The officer excitedly asked him if he had done the shooting and Bussell ran back up the stairs.  It’s likely then that Bussell grabbed the gun and hid it.

Reinforcements arrived and found Rose searching the room which he and Bussell occupied.  It is possible he was searching for his pistol, which was found wrapped in a towel, in the bathroom.

Patrolman Eifert and Rose were rushed to Booth Hospital.

Arlyn Bussell (28), at the time a striking CIO steel worker from Monroe, Michigan, was taken into custody as a suspect in the shooting of Patrolman Eifert.  Three disorderly women were also taken into custody; Lucille Coatney (18) of Monroe, her sister Helen Coatney (22) of Monroe, and Mrs. Jackie Holley (19) of the 4th Street address in Covington.  All three were charged with Disorderly Conduct.  Mrs. Holley was additionally charged with Living in Adultery.

Patrolman Eifert was dead upon arrival at the hospital at 6:15 a.m.

Almost immediately after the shooting, Covington Police Chief Alfred Schild told the press that the shot that killed Patrolman Eifert was fired by Rose.

Bussell testified that he and Rose were out and that he returned to the rooming house after Rose; that on the way, he passed Rose’s girlfriend, Lucille Coatney (18), who said, “The police are coming.”   Bussel continued up the stairs and, seeing Rose, asked why the police were coming.  Rose responded by threatening to kill the girls and “the first cop who comes up the stairs.”  As Bussell walked toward his room, he heard shots behind him and then Rose came to him in the hallway and said, “I just killed a cop.  I might as well kill myself.”  At which time, he put the gun under his chin and pulled the trigger.  Bussell grabbed the gun and the bullet went through Rose’s chin instead.

The Prosecution rested their case the next day at 10:30 a.m.

The defense attorney, Stanley Chrisman, tried a few legal maneuvers, including requesting a preemptory dismissal of charges and a plea of temporary insanity, but the Judge did not allow them.

Rose testified that he and Bussell had been drinking for several hours prior to the shooting and that they then returned to their rooms to get money from Lucille.  He said that when she refused, he went to bed.  Lucille got out of bed and he followed her.  He said his next memories were of him shooting himself and then waking up in the hospital.

The case was handed over to the jury that day, April 4th, at 2:30 p.m.  They deliberated for 1 hour and 20 minutes, returned a verdict of guilty with a recommendation of life imprisonment.  Judge Goodenough announced that he would formally sentence him during the next week.  Rose wept.

It was learned after the trial that Rose had passed notes through a Kenton County Jail turnkey to the three female witnesses telling them how to testify.  On April 9, 1946, the turnkey, James Fox, was suspended.  Detectives and the prosecutors discussed charging Lucille Coatney with Perjury, because on the stand she denied hearing Rose’s intent to kill a policeman, though she had stated as such to responding officers on the night of the murder.

Instead, all four were released on April 17, 1946 on orders of Judge Goodenough.  The women were each fined $100 and costs and sentenced to 50 days in jail.  Judge Goodenough probated the fines and sentences conditional upon them leaving town, ostensibly returning to Michigan, and never returning.

Bussell’s indictment for Willful Murder was filed with the understanding that it could be reopened at any time and with the inference that he too was no longer welcome in Kentucky.

Life imprisonment in Kentucky at that time meant a term of about eight years before parole was possible.  On June 2, 1955, Covington Mayor, John T. Maloney, and the Covington Police Department were outraged to find that Rose was being recommended for parole.  The mayor contacted State Parole Officer Robert Aldemeyer.  James E. Quill, Commonwealth Attorney, contacted the State Parole authorities.  During their annual state convention held in Covington that year, the Fraternal Order of Police also objected to the parole.  The pleas reached the governor’s desk who remanded then back to the Parole Authority for review.

On September 1, 1955, little more than 9½ years after the premeditated murder of Patrolman Eifert, Rose (29) was released on parole to his hometown of Tazwell, Tennessee on the condition that he stay there and have a job.  Parole officials did not notify the courts, prosecutors, police department, or the people of Covington.

About a year later, violating the terms of his parole, he married Anna Maude Williams of Miamisburg, Ohio in Wayne County, Indiana.  At some point thereafter, he returned to Michigan where, at the age of 70 he died; almost 50 years to the day after taking the life of the 39-year-old patrolman.

Catherine Eifert, after 40 years without a husband, passed away before her husband’s killer, in 1986.

On May 8, 1998, Covington Police Chief Al Bosse retired Patrolman Eifert’s Badge Number 53 along with the badge numbers of two other Covington officer who died in the line of duty.

Patrolman Eifert’s great grandson, Chris Gangwish, also joined the Covington Police Department in 1999.  He served both as a Community Relations Officer and Special Weapons and Tactics (SWAT) Team Negotiator beginning in 2005.  He was promoted to Specialist and beginning in 2006 served a two-term as Vice President of the Covington Fraternal Order of Police.  He served another term as President until 2010.  He retired from the Department in 2015.