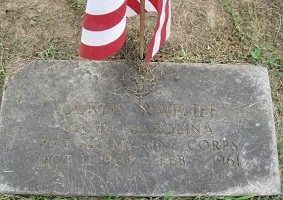 James was born on October 11, 1908 in Kentucky.  He may have attended Walnut Hills High School in Cincinnati.

James enlisted in the United States Marine Corps on November 16, 1929 and completed Basic Training at Parris Island.  His first assignment was at the Naval Operating Base in Norfolk.  By December 1930, he was serving in Nicaragua.  He returned to U.S. soil and served in Quantico where he reenlisted.  He was honorably discharged as a Private 1st Class on April 23, 1935 after serving almost six years.

We believe James joined the Lawrenceburg Police Department about 1941.

On February 7, 1961 Norman Wildridge, a Lawrenceburg plumber, came to the Wilson Oil Company on U.S. Route 50 demanding that his estranged wife, Betty Wildridge, accompany him in his car.  Mrs. Wildridge had recently filed for divorce.  Wildridge was convinced to take along the business owner, Clarence Wilson (46).  When they got to the car, Wildridge pulled a handgun and directed Wilson to drive.

They drove around Lawrenceburg for a while, talked about domestic problems, and even stopped for lunch.  When they returned to the business at 3:25 p.m., four hours after the original abduction, Mrs. Wildridge was able to get into the office and call the police while Wildridge and Wilson stayed in the car in the front parking lot.

Patrolman Ratliff responded and when he arrived, company employees told him that the two were locked in the vehicle.  By then, Lawrenceburg Mayor Louis E. Liddle (brother of Lawrenceburg Charles A. Liddle who died in the line of duty twenty years before) also responded.  Patrolman Ratliff advised the mayor, “The man is in that car over there.”  The Mayor replied, “Jim, be careful.”

Cincinnati Enquirer reporter Robert Johnson heard the call on a police radio and was also on the scene.

Patrolman Ratliff approached the car.  At that time, Mr. Wilson was trying to convince Wildridge to not shoot passersby.  The officer tapped on the window and Wildridge immediately opened fire.  Patrolman Ratliff fell to the ground wounded with three bullets in his chest.  He propped himself up on one elbow and returned fire.

Mayor Liddle and Johnson ran to the nearby store to call for more police response and an ambulance.  Seeing the Mayor already with the phone, the reporter ran back to the scene.  Wildridge was bleeding from a superficial head wound, but Patrolman Ratliff was lying on his back, revolver in hand, barely breathing.

Wildridge was taken to Dearborn County Hospital and held there under guard.

Patrolman Ratliff was rushed to Dearborn County Hospital but pronounced dead on arrival.

During the preliminary investigation, police found a rifle and several pistols in the back seat of the car.  Dearborn County Prosecutor Harry Zerbe questioned Wildridge at the hospital.  His case went before a Dearborn County Grand Jury on February 16, 1961 and he was indicted for 1st Degree Murder.

On March 13, 1961 Wildridge attempted suicide with sleeping pills that he had hoarded over the previous weeks.

Wildridge committed suicide in prison in Aurora, eighteen years and one week later, on April 26, 1979.  He is also buried in Greendale Cemetery; four sections from Patrolman Ratliff.

The road leading to the Lawrenceburg boat dock was renamed Ratliff Drive in honor of the slain officer, but this honor was stolen when it was renamed Tanners Creek Drive.