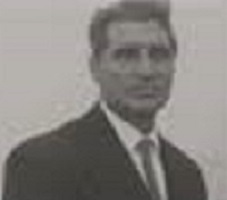 Charles was born October 10, 1909 in Lawrenceburg to Frances E. “Frank” and Louisa (Schnetzer) Liddle.  He could trace his Dearborn County roots back five generations when William Liddle, born in England in 1763, emigrated to the United States soon after the Revolutionary War.

By 1940 he had been appointed a Patrolman for the Lawrenceburg Police Department.

At the time, he was living with his widowed mother and stepsiblings at 248 Water Street.  Patrolman Liddle was also a member of Fire Company Number Two and had been active in civil defense work during World War II.

On July 19, 1942, while conducting a traffic stop, a citizen approached Patrolman Liddle, to report a disturbance.  Patrolman Liddle responded to the disturbance and while in route he crashed into another vehicle at Walnut and Third Streets (U.S. 50).  The impact caused both vehicles to overturn and Patrolman Liddle was thrown from his patrol car.  He sustained serious injuries and was transported to Good Samaritan Hospital in Cincinnati.

He returned home and thought he had recuperated.  On August 8, 1942, Patrolman Liddle returned to work.

He was on duty at the Dearborn County Fair on August 26, 1942 when he collapsed.  He was rushed back to Good Samaritan Hospital where surgery failed to save his life.

Patrolman Liddle died from an intra-cerebral hemorrhage on August 27, 1942.

He was predeceased by his father.  Patrolman Liddle was survived by his mother, Louisa Liddle; brother, Louis Elmer Liddle; and stepsiblings, Louise M. Horne, George H. Horn, and Richard M. Horn.  He was buried in Greendale Cemetery on the same date as his death, August 27, 1942.

Charles A. Liddle Drive was built off Enterprise Drive in Lawrenceburg about 2001 and named for Officer Liddle.

If you have information, artifacts, archives, or images regarding this officer or incident, please contact the Greater Cincinnati Police Museum at Memorial@Police-Museum.org.