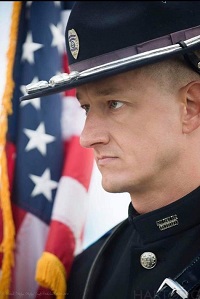 He graduated high school during June 1990 and three months later began serving in the Colerain Township Fire Department.  Since then he served Colerain Township, North College Hill, Lincoln Heights, or all of Hamilton County as a dispatcher, dog warden, firefighter, or police officer; sometimes three at a time.

Dale joined the Colerain Township Fire Department during September 1990.   On May 12, 1991, after fighting an apartment building fire on Bising Avenue he was transported to and treated at Providence Hospital for heat exhaustion.  He continued to serve until August 1998.

Starting during February 1998, he additionally started working as a communications officer at the Hamilton County Communications Center.  He continued until 2000.

While working two jobs, he joined the North College Hill Fire Department as a Fire Investigator in 1992 and served as such until 1997.

Firefighter/Fire Investigator/Dispatcher Woods transitioned to the North College Hill Police Department as a part time Police Officer on September 13, 1997.  Three years later he was appointed as a full time Police Officer, finally settling on his vocation.  He served as such until March 2003.

On March 27, 2003, found his final home with the Colerain Township Police Department.  During July 2009, Officer Woods was recognized by the Southern Ohio Chapter of Mothers Against Drunk Drivers (MADD) as a “Top Cop” for the year.  During March 2015, he was involved in the testing and selection of body worn cameras for the Department.  He was also a member of their Honor Guard, Bicycle Patrol, Quick Response Team, Missing Person Team, and Special Weapons and Tactics (SWAT) Team, and served as a Detective and firearms instructor.

On September 16, 2018 Officer Woods and Lieutenant Chris Phillips responded to a report of a residential structure fire in the 8000 block of Pippin, ahead of fire personnel, and heard smoke alarms going off.  When alerted to a blind lady on the second floor, went into the smoke-filled room, and rescued the lady.  She suffered minor smoke inhalation and was treated at a hospital and released.  He was awarded the Medal of Valor and Lifesaving Award.

In his spare time, Officer Woods owned and operated Details by Dale, an auto detailing shop.  He played drums as a member of the Cincinnati Tradition and Limited Addition Drum and Bugle Corps and at John Wesley United Methodist Church.  He enjoyed bodybuilding and golf, was a member of the Clovernook Country Club, and considered by many to be a “professional” golfer.

On Friday, January 4, 2019, about 9 p.m., Officer Woods responded to the scene of an auto crashed into a utility pole in the 7600 block of Colerain Avenue.  Officers had to wait for utility company employees to make the scene safe.  While they were protecting the scene, Officer Woods was adjusting the traffic flow pattern at 11 p.m. by moving a traffic cone and a pickup truck, driving at “at full speed”, struck Officer Woods.  Officer Woods was treated by his former friends and peers of the Colerain Township Fire Department and transported to the University of Cincinnati Medical Center; the best trauma department in the country.  It was immediately known it would take their every skill plus a miracle to save his life.

Colerain Township requested the assistance of the Cincinnati Police Department in investigating the scene of the crash.  They completed the on-scene investigation at 9 a.m. Sunday morning, January 5, 2019.  Their investigation continues.

A procession was held at 9:30 a.m. on Saturday, January 12, 2019 from the Spring Grove Funeral Homes to Colerain High School, pausing at North College Police Department, Clovernook Country Club, and Colerain Township Police Department along the way.  Hundreds of fire apparatus and police vehicles blocked traffic at every intersection and thousands of citizens lined the route, standing in stone silence as the cortege passed.  A public visitation was held at Colerain High School for four hours as citizen filed by his remains.

A funeral service was held at 12 Noon on Monday, January 14, 2019 at the Cintas Center, 1624 Herald Avenue, on the Xavier University campus.  A cortege of marked police vehicles escorted Officer Woods from Spring Grove Funeral Homes at 9 a.m. and many citizens again lined the route.

After the service, the cortege returned to Spring Grove Cemetery where he was laid to rest and a “Final Call” was broadcast by Hamilton County Communications Center.  A private graveside service followed.