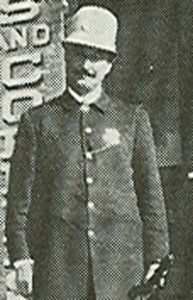 George was born April 3, 1870 in Germany to Jacob and Mary (Smith) Kloster.

He served in the Calvary of the German Army.  After leaving military service, he immigrated to the United States during 1888 and settled in Wyoming.  Ten years later, on January 24, 1898, he was the victim of a burglary where $12 (more than $2600 in today’s dollars) was taken from the room where he boarded.

Within a year of the burglary, during 1899, he joined the Wyoming Police Force, probably as a Night Watchman.  By day, he was a Coachman working out of 1320 Race Street in Cincinnati.  By 1906 he was elected to the position of Village Marshal.  Also, during that year, on April 26th, he married a widow, Elizabeth Reisinger, and took in her two children.

Marshal Kloster had a very active career and his name very often showed up in local newspapers with his murder investigations, stabbing suspects, and other arrests.

Due in part to the fact that his force was considered to be inadequate for the job of policing Wyoming, and calling back to his days in the German Calvary, Marshal Kloster and Mayor Kirby purchased a horse in Cincinnati and on February 15, 1909 Marshal Kloster became the first mounted officer in any of the villages in the Millcreek Valley.

On September 6, 1910 he worked out a stop-watch, telephone system to catch speeding vehicles on Springfield Avenue.  He and the Mayor measured a distance of 1½ miles.  At one end officers would see a vehicle they believed was exceeding the limit and notified officers at the other end who would start a stopwatch.  If they came by the end marker too soon, they were stopped and given a warning or a ticket.  Marshal Kloster was also the first motorcycle officer in the Village.

On May 2, 1912, a citizen Henry Van Rohr reported to Marshal Kloster that a suspicious man was loitering in a field on Cooper Avenue.  Eleven months prior, a female had been attacked there in a much-publicized case.

At 10:45 p.m., Marshal Kloster responded to the field and approached the suspicious man.  When he was within a few feet, the man pulled a revolver and shot Marshal Kloster from close range three times in his right side.  The balls coursed through his body and exiting on his left side.  The man ran away and Marshal Kloster emptied his own revolver at him as he disappeared in the darkness.  Marshal Kloster was certain that one or more of his shots took effect, that he mortally wounded the suspect, and that his body would be found nearby.

Night Patrolman George Distler and a number of Wyoming citizens carried Marshal Kloster to the Mayor’s Office and called for Doctors Gillespie and Davis to respond.  They determined he was in very serious condition and directed that he be immediately taken to the hospital.  Patrolman Distler called Cincinnati Night Chief Louis Renkert who dispatched a City car to transport him.  They also collected Mrs. Kloster and her two children rode in the back seat with Marshal Kloster to Jewish Hospital; where he immediately underwent surgery.

Marshal Kloster died at 3:15 a.m. the next morning, May 3, 1912, due to shock and hemorrhage from the wounds to his chest and abdomen, including one that destroyed his liver.

Marshal Kloster was survived by his wife, Elizabeth (Bruns-Reisinger), and two step children, Edith Reisinger (20) and John Reisinger (19).  His funeral was held from his residence at 330 Crescent Avenue at 8:30 a.m. on Monday, May 6, 1912.  A High Requiem Mass was celebrated at Saint James of the Valley at 9 a.m.  He was buried thereafter in St. Mary’s Cemetery in Saint Bernard.

The Acting Mayor Albert Reichman, soon after the shooting, notified Lockland Marshal Handley who brought bloodhounds to the Cooper Avenue field, but the hounds’ search failed to turn up a trail.

Eleven days later, on May 14, 1912, Wyoming Night Watchman Distler was summoned to Oakley by Richard Weslie who informed him that he had seen a suspect fitting the description of the shooter being tended to by an unidentified female for a gunshot wound to his side.  For fear of being seen, Weslie left the scene and called the police.  The two went back to where the man and woman had been seen and found a collar with the letter “G” monogrammed, and a towel, but the two were gone.

Former Cincinnati Police Chief William H. Jackson was brought in to head up the investigation into the Marshal’s murder.

By July 1912, two months after the murder, William Ellison of Lockland was determined to be a viable suspect.  He had been arrested for two other crimes of violence and, when arrested, had a healed bullet wound and two bullet holes in a coat in his possession.  On July 18, 1912, he was sentenced to 20 years of hard labor for an unrelated Robbery.  He fit the description of the murderer, but it appears that no one was ever charged with Marshal Kloster’s murder.

Elizabeth, having lost two husbands in less than ten years, never remarried.  She would later move in with her brother John and still later with her married daughter Edith Steinwert.  She died at 78 during 1941 and is buried with her daughter in St. Joseph (Old) Cemetery.

Two law enforcement officials have been killed in Wyoming.  Both lived on Crescent Avenue.  Both investigations resulted in viable suspects, but evidence of proof beyond a reasonable doubt was found in neither.

If you have information, archives, artifacts, or images regarding this officer or incident, please contact the Greater Cincinnati Police Museum at Memorial@Police-Museum.org.