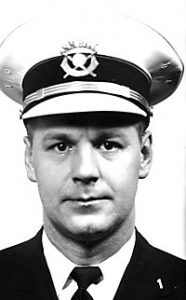 Charles was born August 6, 1928, the first of 14 children born to Charles Joseph Handorf, Jr. and Rose Mary (Kramer) Handorf.  He attended Roger Bacon High School from 1942 to 1945 and then earned his diploma at Western Hills Night School in in 1946.

Charles joined the Cincinnati Police Division as a Police Recruit on September 15, 1952.  On November 17, 1952 he was promoted to Patrolman, issued Badge 269, and assigned to District 2 (314 Broadway).  On January 1, 1953, Patrolman Handorf was rotated to District 7 (813 Beecher Street), then rotated a year later to District 4 (7017 Vine Street).  During 1956, he served as the District 4 representative on the Fraternal Order of Police Dance Against Delinquency Committee.  By 1957, Captain Clemens Merz, District Four Commander, had determined him to be one of the most reliable men in the district and detailed him to plain-clothes investigations within the district and continuously prodded him to become a sergeant.

Hardly a year went by that Patrolman Handorf, and later Sergeant Handorf, was not in a newspaper multiple times for arrests, shootouts, and achievements.

On December 19, 1958, the Cincinnati Civil Service Commission announced the Patrolman Handorf finished second on a promotional examination for a Juvenile Bureau investigator, but the list expired before he could be promoted.  He was promoted to Detective on December 11, 1960 and issued Badge D-36.  He competed in his third promotional exam, finished fourth, and was promoted to Sergeant three months later, issued Badge S-64, and reassigned to District 2.

On December 1, 1961, Sergeant Handorf completed the prestigious Administrative Officers Course at the Southern Police Institute (SPI), widely regarded as the finest secondary law enforcement course in the country and usually reserved to lieutenants and above.  During August 1964, Sergeant Handorf was selected to attend another of the top four police administration courses at the Northwestern University Traffic Institute (NUTI).

On March 12, 1967, his brother Larry joined the Police Division as a Police Officer.

Sergeant Handorf was still at District 3 in December 1974 and had served his community 22 years and earned 18 letters of appreciation and/or commendation: seven of which from Cincinnati Police Chiefs.  During his last seven years he had earned performance evaluations of 95 to 98 out of possible 99.  His district commander, Captain Gary U. Neville, would later describe him as “one of the best – if not the best – plainclothes undercover sergeants [that Cincinnati] ever had.”

On December 7, 1974, having taken the last four hours off, he had completed his tour of duty at midnight and was walking out the front door by 12:15 a.m.

He joined the Cincinnati Fire Department about 1957.  Ten years later, Merz was charged administratively with falsifying a statement that he was sick and disobeying an order to report to the Fire Surgeon for examination.  A disciplinary hearing was scheduled.  He threatened Assistant Fire Chief Vernon Armstrong when he tried to serve the notice.  He then failed to show for the hearing.  The Safety Director terminated him in March 1967.

Since his dismissal, he also had several run-ins with various people resulting in three arrests for Assault and Battery, two for Menacing, one for Disorderly Conduct, and one for Driving While Intoxicated.  He also had problems with his wife, ending in his divorce, then with his common-law wife, Nancy Woefle, and other girlfriends.

He was known to his neighbors as a “strange character” with a lot of troubles.  He had been undergoing treatment for kidney and liver ailments.  He had recently told a neighbor that he had a brain tumor.  On Saturday night, December 7, 1974, he staggered into his home at 6438 Home City, barricaded himself inside, and began discharging one or more handguns.  George Rose, a neighbor, called Cincinnati Police Communications.

At 12:15 a.m. on December 8, 1974 Cincinnati Police Communications received a report that the man living at 6438 Home City had just discharged a firearm.  District Three Police Officers Hiawatha Hampton (Car No. 301) and David Holloway (Car No. 301A) were dispatched.  Upon his arrival, Officer Hampton, stepped onto the porch and heard a shot fired inside the residence.  He left the porch, crouched down behind a rock wall, and radioed Communications with a report of an armed, barricaded man.  Officer Holloway arrived and called for a supervisor to respond.  Sergeant Harvey Freeman (Car No. 319) was dispatched, and Sergeant Donald Andres (Car No. 320) also responded.

Sergeant Handorf, though off duty, also responded in his personal vehicle.

Captain Neville (Car No. 300) was off duty and also in his personal car.  He heard the call on his police radio and also responded from Sidney and Covedale Avenues.  Having a nearly direct route down Cleves Warsaw Avenue, Captain Neville was the first supervisor to arrive, and he conferred with Officers Hampton and Holloway.

Many other District Three and Delhi Township officers responded.  They were all instructed to surround the house and observe from secure positions.

Captain Neville asked Delhi Sergeant Redman to position his cars with their spotlights fixed on the windows of the home (Cincinnati’s vehicles were not so equipped).  He directed officers to surround and observe the house from safe positions.  He made numerous attempts to communicate with Merz by phone and by bullhorn.

Police Officer Robert Schlinkert was dispatched to pick up and bring Ms. Woefle to the scene, but she proved to be too emotionally distraught to communicate with Merz.

During all of this, Merz did not respond.  He continuously walked around on the second floor of the house and occasionally fired a shot inside.  Then, suddenly, Merz threw open a window and had a dialogue with Sergeant Andres and Police Officer Cleon Wingard on the side of the house; but he refused to throw down the semiautomatic pistol he held in his hand stating that he did not wish to see the pistol harmed.

An hour and a half into the situation, at 1:45 a.m., Captain Neville determined that his passive options were exhausted.  He directed Sergeant Freeman to discharge a projectile of tear gas into the residence using a 37mm launcher.  The projectile did not fly true, drastically veering upward, and struck the exterior wall about two feet above the window.  Merz immediately began firing at the officers in front using a .32 caliber revolver and Mauser P. 38 9mm semiautomatic pistol.  Every officer in the front of the house returned fire: Captain Neville, Sergeant Handorf, Specialist McCurry, and Delhi Patrolmen Roebel and Scarborough with revolvers, and Officers Wingard and Holloway and Sergeant Redman with shotguns.  In all, 29 shots were fired by Cincinnati and Delhi officers.

Seconds later, Sergeant Handorf lay dead with a bullet wound to his right eye.  The bullet had come through his thumb and into and through his eye.  Several officers rushed inside and found Merz dead with multiple bullet wounds.

The Cincinnati Fire Division’s Rescue 1 transported Sergeant Handorf to General Hospital, where he was pronounced dead on arrival by Dr. Troop at 3 a.m., and then to the morgue at 3:10 a.m.

Two other handguns were found with Merz: a .380 caliber semiautomatic pistol and a .38 Special revolver.    He was also transported to the hospital and the morgue.  An autopsy revealed that he had alcohol and drugs in his system and two fatal wounds, both from .38 Special Super Vel bullets.  It was determined that Delhi Officer Roebel had been using Super Vel ammunition, a copper jacketed hollow point, high velocity round.  Cincinnati officers fired round nosed, lead bullets which were far inferior to the Super Vel and most of which ended up in the wood framing surrounding the window.

Visitation was held for four hours on the evening of December 10, 1974 at Niedhard-Minges Funeral Home in Westwood.  A Mass of Christian Burial was celebrated at the Church of the Little Flower in Mt. Airy on December 11, 1974.   Police Chief Carl V. Goodin and six assistant chiefs served as honorary pallbearers as 800 mourners, including 750 police officers, followed Sergeant Handorf to Spring Grove Cemetery where he was buried.

During the Annual Banquet of the Hamilton County Police Association in January 1975, Special Awards were posthumously awarded to Sergeant Handorf and Patrolman David Cole.

On May 14, 1975, a bronze plaque affixed to a new flagpole honoring Sergeant Handorf was unveiled at District 3 (3201 Warsaw Avenue).  It was paid for by District 3 residents, merchants, and civic groups.  Sergeant Handorf’s brother, Nicholas Handorf, has held a vigil there every year since.  For three decades, these vigils were relatively private, but in 2007 all the uniformed personnel in the stationhouse filed out and stood at attention during the vigil.  Since then, his vigils have attracted dozens of active and retired personnel.  During 2021, the vigil will include a secondary street renaming at Warsaw and Considine by Cincinnati City Council.

Sergeant Handorf’s other brother, Lawrence, went on to be promoted to Sergeant in 1981 and Lieutenant in 1986.  Lieutenant Handorf retired September 6, 1986.

During 1995, Sergeant Daniel Gerard was assigned Badge No. S64 and voluntarily surrendered it so that the Police Division could retire it.