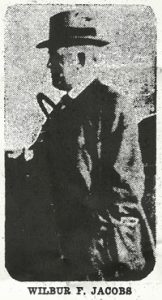 Before it was declared unconstitutional, an Ohio statute allowed justices of the peace and mayors of Mayor’s Courts to enforce the law outside their jurisdictions and to keep the assets that they seized. Morris Y. Shuler was a Justice of the Peace for Wayne Township in Butler County and Mayor of the Village of Seven Mile. In 1922, realizing a fiscal opportunity for his village, he hired six agents to enforce the state statutes throughout Butler County and they became the scourge of bootleggers, rum runners, and “soft drink parlor” operators, making 400 or 500 arrests a year with an 82% conviction rate.

As the war on liquor escalated in Butler County, so did the war on those enforcing Prohibition. In November 1922, Fairfield Township Motor Constable Emery Farmer was run off the road and killed, presumably by bootleggers. Several of Mayor Shuler’s agents had close calls with the violent offenders; including Mayor Shuler himself who had a stick of dynamite explode in his car; and an attempt to burn his home. Prohibition Agent Wilbur Jacobs would be next.

Wilbur was born December 4, 1881 in Wayne Township to John R. and Margaret Jennifer (Clark) Jacobs; prominent Seven Mile residents. He spent a number of years out west in Texas and New Mexico. During August 1919 he married Miss Minni Howry of Taos, New Mexico, and was living in Mountain Air, New Mexico with his new bride on a 440-acre horse and cattle ranch.

About 1920, he returned to Seven Mile, where his children, Helen Jane Jacobs and Wilbur Francis Jacobs, Jr., were born. He was an active member of the First Methodist church of Seven Mile and a prominent Mason and member of the Mystic Shrine.

At the beginning of 1922, Wilbur went to work for Mayor Shuler as a Prohibition Enforcement Agent.

During January 1925, he additionally opened up a blacksmith shop one mile north of Seven Mile on Collinsville Pike.

By June 1925, he was highly respected by all who knew him and often considered the best prohibition officer in the region because of the courtesy. He was fearless in the discharge of his duty and on many occasions, he is said to have prevented serious trouble when arrests were made through his courage and tact.

Milton Henson came from Clay County Kentucky and worked as a coal miner in Laurel County. He was drafted into World War I where he was reportedly injured from poison gas. Later it was reported that his injury was the loss of a finger, for which he received a pension of $20 a month. Still later, after his conviction for Murder, it was revealed that his finger was lost in a bar fight and his pension was withdrawn.

He had been twice a patient at the Dayton State Hospital, reporting that he was suffering from mental disorders. On January 10, 1925 he escaped from Mercy Hospital and was found later at a boarding house at 314 S. 4th Street in Hamilton. Later, it was determined that his claims of mental illness were just that – claims – and were never officially diagnosed.

On March 2, 1925, Agent Jacobs served a search warrant at Frank McDaniel’s Café at 122 Main Street in Hamilton. Jacobs found a quart of red moonshine. Henson testified two days later that he saw a former employee plant the alcohol and McDaniel was acquitted.

By then, Henson was living on Augsburger in Coke Otto (now New Miami) with a married woman, Mrs. Ethel Grathwohl.

About June 13, 1925 Henson, enraged over an argument over a craps game at their home, fired some shots at his challengers. The shots did not take effect on anyone, nor was the incident reported to police, but it left several bullet holes in the house.

On June 20, 1925 at 10:45 p.m., Agent Jacobs led Mayor Shuler and State Prohibition Officers Arnold Skinner, Louis Bolser, and Robert Tewart in a raid at Grathwohl’s and Henson’s home. About a dozen people were engaged in a party inside.

Shuler stayed with the cars about 200 yards from the residence. After breaching the door, Skinner, Bolser, and Tewart ran upstairs to where they were told the liquor was. A tub of home brew was found in an upstairs bathroom. Agent Jacobs stood in a front room among a few people and Mrs. Grathwohl demanded that he go back through the door and read the search warrant. Milton Henson then walked into the room, slightly stooped over. When he reached the center of the room, he stood erect, pointed a revolver at Agent Jacob’s head, yelled, “Read it, damn you!” and pulled the trigger. Agent Jacobs fell to the floor dead, shot through the head.

Henson ran from the home and escaped. Several others ran from the home, most of whom were stopped by Mayor Shuler at the street. Ten men were arrested and charged with gambling, but not as accessories to the murder.

Magistrate David Moore of Coke Otto was also arrested a few minutes after the shooting. He had come upon the scene in a drunken state and created a disturbance.

Sheriff Luther P. Epperson was convinced that Henson had escaped the county.

Hamilton Detectives Dulle and Mueller investigated the incident. There was a tedious search for the spent bullet among the several bullet holes that were found from the incident during the prior week. The next night, they drove to Dayton, Ohio and met with Acting Chief of Police Charles Morton to view a telegram sent by Henson to his brother bidding his brother goodbye.

On the 24th, the search for Henson had expanded to Clay and Laurel Counties in Kentucky, where Henson previously lived.

Based largely on testimony from Brison Mobley, on June 27, 1925, Coroner Hugh Gadd found at his inquest that Jacobs was killed in a premeditated murder perpetrated by Milton Henson.

A June 23rd Seven Mile reward of $1000 prompted an informant to tell law enforcement where Henson was holed up. On July 1, 1925 police found Henson, weakened from lack of food and sleep, in a barn, three miles north of Brookville, Indiana. A posse of seventeen men, led by Deputy Sheriff Wesley Wulzen, closed in on the barn about 5 a.m. He was arrested without a fight. In the county jail he boasted, “If I had been awake, I would have got those two men who come in the barn after me and two or three more before they got me.” He made a complete confession to authorities and told them that he threw the Smith & Wesson .38 Special into a river near Brookville.

On November 21, 1925, another of Mayor Shuler’s Prohibition Agents, Robert Oliver Gary, was shot through the neck and killed instantly while reading a search warrant he was serving at Olney Wells’s bar in Hamilton.

On March 26, 1926, the State Industrial Worker’s Compensation Board refused the claims of the widows of Prohibition Agents Jacobs and Gary, ruling that they did not come under the constitutional definition of “workmen.”

On June 15, 1960, even though the Ohio Pardon and Parole Commission gave them a favorable recommendation, Governor Michael V. DiSalle denied clemency to Henson (62). He died in prison six years later on June 1, 1966 and his remains are buried the Greenwood Cemetery, Section W, Lot 404, Grave 1.

If you have information, artifacts, archives, or images regarding this officer or incident, please contact the Greater Cincinnati Police Museum at Memorial@Police-Museum.org.