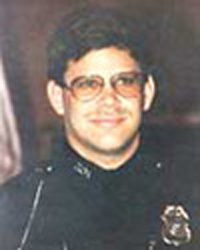 Tom was born December 27, 1958 in Louisville to Robert Emmet and Marie (Passafiume) Noonan.  He graduated from Manual High School.  After high school, Tom worked at K-Mart.

He moved from Louisville during 1984 and joined the Newport Police Department.  Two years later, he transferred to Highland Heights.  He carried a Bible everywhere he went.  When working Sundays, he spent his lunchtime attending Mass.  His business cards were imprinted with an apocryphal Bible verse – “Strive for justice for thy soul, and even unto death fight for justice and God will overthrow thy enemies for thee – Ecclesiasticus 4:33.”

Officer Noonan was also a member of the Campbell County Fraternal Order of Police and of St. Therese Catholic Church in Southgate.

On September 10, 1988 Patrolman Noonan was finishing up an investigation into an attempted rape when an alarm was broadcast regarding a hold up at the Boron Service Station in Highland Heights.  He responded at a high rate of speed and, at the top of a hill on Johns Hill Road, his car went airborne, struck a pole, and overturned.  Patrolman Noonan was thrown from the car and he suffered severe head trauma.

He was survived by his parents and siblings, Rev. Joseph Noonan, Brother Pius X Mary, Patrick J. Noonan, Brigid Noonan, Agnes Noonan, Mary Pierce, Martha Skaggs, Rose Schaeffer, and Angela Noonan.  A visitation and a funeral service were held at Bosse Funeral Home in Louisville on September 12, 1988.  He is buried in St. Michael’s Cemetery in Louisville. Newport Patrolman Steve Foster served as one of his pallbearers.

The holdup was a false alarm.  A cashier at the station advised that the station’s security company called in the alarm after a security system malfunction.

If you know of any information, artifacts, archives, or images regarding this officer or incident, please contact the Greater Cincinnati Police Museum at memorial@police-museum.org.