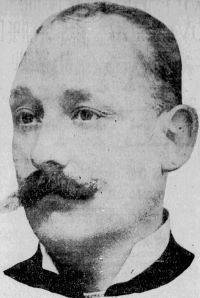 During the morning of April 28, 1907, Patrolman Satters was walking home from the District Four stationhouse on Fifth Street having completed his tour of duty on the night shift.  At Sixth and Stone Streets a man excitedly ran up to him begging for his protection.  The man was being chased by Philip Schwartz, known as the “Duke of Shantytown.”  Shantytown was a group of houseboats and shacks at the foot of Burns Street.

Patrolman Satters died the next day on April 29, 1907.  Having lost his first wife, he was survived by his second wife, Ida, with whom he had no children.  He was buried on May 1, 1907, in Spring Grove Cemetery at 3:30 p.m. Though Ida remarried within a year – to another police officer – upon her death in 1920, she was buried next to Patrolman Satters.

Schwartz was convicted and sentenced to life.