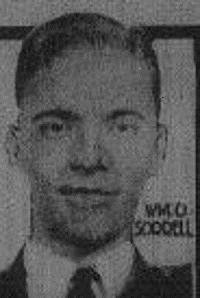 On the night of Tuesday, March 24, 1931, District One District Patrolmen William Orma Sorrell and Edward Kist were patrolling their West End beat when they decided to split up.  Edward Kist headed up Laurel Street while William Sorrell walked over to Betts.

As Sorrell and Kist separated, two armed robbers entered George R. Lewing’s drugstore at 1400 Linn Street at Betts.  The first suspect entered from the front, held proprietor Lewing and his store clerk, Stanley Shaw (14), a Xavier High School student, at gunpoint, and forced Lewing into a telephone booth while demanding that Shaw open the cash register.  A second suspect, entered the store from an alley in the rear, aimed his gun at customer Charles Reynolds, a neighborhood barber. While keeping his gun on Reynolds, he removed $75 from the cash register.

Patrolman Sorrell also entered Lewing’s, unaware of the robbery-in-progress.  As Sorrell positioned himself to enter the front door, the second suspect opened the door for him and, as he entered, shot the patrolman in the forehead.

Both suspects fled the scene.  As they ran, Reynolds grabbed Lewing’s gun and fired at one then chased both suspects north on Linn Street until they escaped down an alley.

Patrolman Charles Elbe was the first responder to the scene and found Sorrell’s revolver still in its holster.

William Sorrell was survived by his wife, Marie Sorrell, and four young children.  At the time of his death, the family lived at 1130 Carney Street.  Services were held the Fourth Christian Church, 1821 Eastern Avenue. Pall bearers included Richard Crampton, Elmer Knox, Fred Choenbaechler, and Edward Kist.  He is buried in Spring Grove Cemetery.

Chief of Police Copelan and other police officials ordered the men under their command to “go to the limit” in their efforts to round up Sorrell’s killer.  Detective Chief Emmett D. Kirgan, Major John Seebolm, and Safety Director John R. Blandford hurried to Headquarters to direct the investigation.  According to one newspaper account, minutes after the shooting, “when the word was flashed over the wires…every plainclothesman and every official was on the trail of the slayer and his companion.”  Consequently, many officers whose shift ended at 11 p.m. Tuesday remained on duty throughout the night to continue the search.

By Wednesday morning police and detectives had rounded up five suspects. Their best suspect, Zera B. Brooks (22).  He was positively identified, and his alibi did not hold up.  However, further investigation caused police to release him.  Eventually, all five were cleared.  While there were more suspects developed and interviewed, the case essentially went cold.

During 1933, Detective Lee Flaugher became aware of two brothers, James and Joseph Murphy, who were tried, convicted, and sentenced to death for a Silverton bank robbery and murder of a cashier.  Though they did not match the description of Patrolman Sorrell’s killers, they were close enough that Detective Flaugher interviewed them before their execution.  Joseph refused to discuss the Sorrell killing, maintaining his innocence until his death.  But James, who had found religion in prison, confessed that he and his brother had killed Patrolman Sorrell.

The brothers were executed on August 14, 1933 and Detective Chief Emmett D. Kirgan closed the case.

Marie Sorrell received a pension of $78 per month for the rest of her life.  Her children each received $15 per month until reaching age sixteen.

If you know of any information, artifacts, or images regarding this officer or incident, please contact the Greater Cincinnati Police Museum at Memorial@Police-Museum.org.

This narrative was revised on June 20, 2013 by retired Cincinnati Lieutenant Stephen R. Kramer.  All rights are reserved to him and the Greater Cincinnati Historical Society.