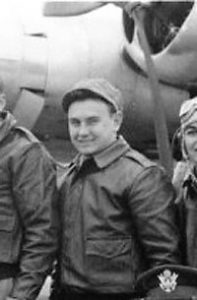 Tex was born November 10, 1923 in Dayton, Ohio to Alexander Steffan and Garnet J. (Mull) Pitakos (or Petrakos).  Alexander immigrated from Greece in 1908 and worked as a cash register assembler.  Near the end of Prohibition, Alexander was rumored to be a member of the underworld in Dayton and known as Alex the Greek.  He was shot and killed in the Crystal Gardens gambling room on April 12, 1931.  When Tex was eight years old, his mother took him and his brother, Robert, to Newport where she married John Blankenship, a railroad yard conductor.

By June 30, 1942, at eighteen, after three years of high school, Tex was living at 616 Lexington Avenue and working for Wright Aeronautical at Lockland Station.  On February 16, 1943 he enlisted in the United States Army Air Corps to fight in World War II.  He flew thirty air combat missions during four major campaigns.  Warrant Officer Pitakos was honorably discharged on October 23, 1945 with a Distinguished Flying Cross (for “distinguishing himself in support of operations by heroism or extraordinary achievement while participating in an aerial flight”) and an Air Medal (for “a single act of heroism or meritorious achievement while participating in aerial flight.”

Tex went to work at Cincinnati Athletic Goods for a year then the Chesapeake and Ohio Railroad for five years.

On July 5, 1952, an eighty-mile-per-hour pursuit by Covington Police Department ended up in Newport where the pursued car crashed into Tex’s personal vehicle causing him minor injuries.  Coincidentally or not, ten days later on July 15, 1952, he joined the Newport Police Department as a Patrolman.

During 1953 he survived a shootout at Glen Schmidt’s Playtorium during a holdup.  By May 1955, Patrolman Pitakos was assigned to a motorcycle in the Traffic Department.  While off duty on May 20, 1955, he discovered and helped capture three burglars who had broken into Widrig’s Pharmacy on York Street.  Police Chief George Gugel named him to a prestigious committee on June 7, 1955 to formulate plans for a reorganization of the police department.  On August 18, 1957 Patrolman Pitakos and his partner were credited with saving two lives in a fire when they smelled smoke coming from the second floor of a residence at 612 Central Avenue.  Eight days later, he had shots fired at him while successfully pursuing and capturing a man wanted for a murder several minutes prior.  On September 14, 1957 he overpowered and disarmed a man with a knife.  On August 25, 1957, he survived another shootout, this one at the Midwestern Bar at Sixth and Central, where bullets hit his car.  He was mentioned dozens of other times in newspapers during his six-year career.

By 1958, for at least four years, he had been living with his wife and three children at 737 Putnam Street.

Roosevelt X. Dawson, Jr. was born March 26, 1930 in Selma, Alabama to Roosevelt Dawson, Sr. and Ethel (Nunn) Dawson. By 1940, his father was working as a machinist, had remarried to Annabella Dawson, and moved his family to 1054 Cutter Street in Cincinnati.

In his mid-twenties, Roosevelt Jr. was operating an unlicensed shoe shop in the Cincinnati West End.  His business was ordered closed and he was fined $200 by the Cincinnati Board of Health.  On Saturday, February 4, 1956 Cincinnati Patrolmen Louis Smith and Richard Atkins attempted to arrest Dawson for operating the business without a health permit.  He struck Patrolman Smith over the head several times with a soft drink bottle because, in his words, he belonged to a religious cult that does not observe “the laws of Caucasians.”  He was fined $100 and sentenced to sixty days in the Workhouse.

By late 1958, he was working as a laborer and cook at a restaurant and living at 409 West Court Street in Cincinnati.

On October 15, 1958, Dawson purchased a .32 caliber revolver from the Newport Jewelry Company at 108 East Sixth Street.  He had a recently healed bullet wound, but we do not know how he got it or whether that entered into his motive for purchasing the gun.

Shortly before noon on the next day, October 16th, he tried to return the revolver for the $23 he paid for it.  The storeowner, Nathan Shostack, refused.  Dawson left, but came back and held up Shostack for $114.  A store employee, Norbert Ridiman, walked in on the robbery and Dawson took a shot at him.  Ridiman ran to Gatiff Motors and summoned police.  Shostack retrieved his own revolver and chased Dawson out of store, firing several shots into the air to attract attention.

Patrolman Tex Pitakos was at the Fourth Street firehouse when he received the holdup broadcast.  He assured the fire personnel he would capture the bandit and see them again in a few minutes.  As he drove to Sixth and Saratoga Streets in an effort to head off the robber, Detective Chief Leroy Fredericks and Detectives Kenneth Jones and Pat Ciafardini went up York Street.  Patrolman Pitakos picked up Shostack and trailed Dawson to Fourth and York Streets where the two police cruisers and a third police car, driven by Lieutenant Asa Dameron, closed in.

Dawson attempted to hide in the entryway of the Licking Valley Building and Loan Association.  From behind cover, Patrolman Pitakos called to Dawson, “throw out your gun and come out!”  Instead, Dawson came out firing and shot Patrolman Pitakos in the chest.  As Patrolman Pitakos fell, he fired five shots at Dawson.  At least one went awry, “stinging” a cabbie, Pearl Fugate, two blocks from the scene.

Dawson turned his attention to the other arriving officers, emptying his revolver at them.  One of his last shots went through Detective Chief Fredericks’s pants leg without taking effect.  Detective Chief Fredericks and Detectives Ciafardini and Jones returned fire, striking Dawson several times and knocking him to the ground.  Dawson sat up as if he were reaching for something and they shot him again, this time fatally.

In all, 27 shots were fired, including the one that hit Patrolman Pitakos and twelve that hit Dawson.

Dawson was buried in Union Baptist Cemetery on October 22, 1958.

Patrolman Pitakos’ wife, Audrey, died 48 years later in April 2006 and is buried next to her husband.

If you know of any information, artifacts, archives, or images regarding this police officer or incident, please contact the Greater Cincinnati Police Museum at Memorial@Police-Musuem.org.