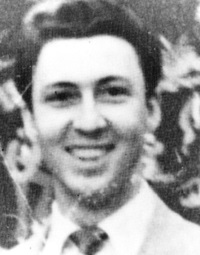 Robert was born on Christmas Day 1925 in Hamilton, the last of five children born to Carl L. and Etta Mae (Owens) Bastin.  He graduated from Lockland High School.

At 17 years of age, Robert joined the United States Marine Corps on August 23, 1943 and served during World War II in the 6th Marine Division.  By October 31, 1944 he had been promoted to Corporal.  During April 1945, Corporal Bastin was assigned to Company E, 2nd Battalion, 22nd Marines.   On May 12, 1945 during the battle for Okinawa, after being shot in the knee, Corporal Bastin rescued two men trapped in a wrecked tank, suffered shell shock, and was buried beneath the debris of a shell explosion.  On November 28, 1945 he was honorably discharged as a Corporal with a Bronze Star and Purple Heart.

Upon his return home, Robert took a position as a supervisor instructor at the Arthur Murray Dance Studio and played amateur basketball so that he could strengthen his injured knee in order to qualify for the Cincinnati Police Division.   On April 15, 1951, he entered the Cincinnati Police Academy, graduated, and was assigned to District 2 (314 Broadway) on July 15, 1951.  He was rotated to District 1 (1024 York Street) on February 1, 1953.  By then, he was living at 646 Lincoln Avenue.  Within a month, he had earned assignment to a beat.  His partner was Patrolman James Feeney (24) of 2704 Euclid Avenue.

On March 7, 1953, at 1:35 a.m., Patrolman Bastin was operating a 1951 Ford sedan, with Feeney as a passenger, east on West Court Street at John Street.  Their vehicle collided with a 1950 Oldsmobile sedan operated south on John Street by David Hines (35) of 716 Baymiller Street.

Both patrolmen were thrown from the patrol car.  Patrolman Feeney suffered a brain concussion, cuts, and bruises and directed passersby to carry him to the police vehicle where he radioed for help.   He was rushed, probably by a Police scout car, to General Hospital where he went immediately into surgery in critical condition.

Hines suffered a compound fracture of his left foot, crushed mouth, and fractures of his skull and nose.  His passenger, Agnes Darden (18) of 327 Ellen Street, suffered multiple cuts and bruises.  Both were taken to General Hospital.

Patrolman Bastin ended up beneath Hines’s Oldsmobile and dragged thirty feet across the intersection.  He suffered a crushed skull, multiple fractures, and traumatic shock and was probably dead when the car came to rest.   Sergeant Lyle Badgett, Highway Safety Bureau, transported his body to General Hospital at 2:17 a.m. – where he was pronounced dead by Dr. Harold W. Baum – and to the Morgue at 4:25 a.m.

Patrolman Bastin was survived by his pregnant wife; his parents; and siblings, Mrs. Christine Pally, Mrs. Roxie Meyers, Lill Bastin, and Benny Bastin.  Services were held on March 11, 1953 at the W. Mack Johnson Funeral Home and he was buried at Walnut Hills Cemetery in Section 31, Grave 425, Row 9.

Patrolmen E. Collier and W. Dewald of the Highway Safety Bureau investigated the crash.  Hines, a former Kentucky prison inmate (convicted of possession burglar tools) with several traffic citations and arrests on his record had been convicted four times in the last two years on traffic violations; reckless driving in 1951, disregarding a red light in 1951, driving without a license in 1952, and disregarding a stop sign in 1952.  Investigators arrested him at General Hospital and charged him with Driving Under the Influence of Liquor and Reckless Driving.

Miss Darden corroborated the amount of alcohol he had ingested, but, when the case came to court, Judge Clarence Denning dismissed the drunken driving charge at the request of the Prosecutor.  Hines then pleaded guilty to Reckless Driving.  The judge fined him and suspended his driver’s license for six months.

Two years after the fatal crash, Mrs. Bastin file a lawsuit in Common Pleas Court against Hines in the amount of $50,000.  Additionally, his wife filed for divorce.  He no longer appeared in The Enquirer and therefore may have radically changed his life, but we suspect he merely left town and plied his trade elsewhere.

During April 1955 Mrs. Bastin was also still in court over worker’s compensation benefits which had been initially denied her.  Several newspaper articles were written about her plight.  We do not know how it was resolved.

During 1995, Cincinnati Police Officer Terrence Forte, Badge Number 230, voluntarily surrendered his badge so that it and the number could be retired in Patrolman Bastin’s honor.