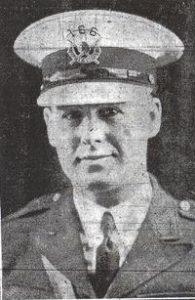 Lawrence was born June 4, 1904 in Scott County, Tennessee to Jonathon N. and Julia (Sexton) Robbins. He attended grade school in Huntsville, Tennessee. He worked as a conductor for three years, a clerk for one year, and an operator for a year.

Lawrence joined the Cincinnati Police Department as a Patrolman on April 7, 1926. He was issued Badge 166 and assigned to District 1 (9th and Central). He later transferred to District 2 (314 Broadway). On June 16, 1935, he was transferred to the prestigious Safety Patrol (City Hall) and assigned to the Downtown Traffic Squad. By 1936 he was living at 1339 Main Street.

Patrolman Robbins, was off duty at 10:40 p.m. on June 25, 1936 when he and his fiancée, Beatrice Gertrude Brown, 1621 Fairfax Avenue, parked his car on Fulton Avenue just inside Eden Park to look at a house that Miss Brown’s mother was considering purchasing. As he was about to leave the vehicle, two men walked up on the passenger side of the car and asked for a match, then brandished firearms and ordered them to, “Stick ‘em up or we’ll fill you full of lead!”

Patrolman Robbins reached for the dash compartment in which he had placed his duty revolver. One of the robbers pointed his handgun at Patrolman Robbins’s head and said, “Don’t try that. We know what you’re after. Come out of there with your hands empty.” But Patrolman Robbins lunged out of the vehicle unarmed, pushed Miss Brown to safety, and fought the two men.

For the next twenty minutes, Miss Brown scrambled to find help and finally waved down a passing motorist, Dr. Verle Kitzmiller. Dr. Kitzmiller found a phone and called the police at 11 p.m. and then went to Patrolman Robbins, finding he had already succumbed to a bullet wound that entered his right back and exited his left arm pit. His body was taken to General Hospital where he was pronounced dead at 10:40 p.m. from intra thorax hemorrhaging.

A blood-spattered coat, apparently purchased in Charleston, West Virginia, was found at the foot of Walter Street. The stolen car was also found on Walter Street near Gilbert Avenue at 5:30 a.m., the next morning, June 26, 1936. Miss Brown’s purse and the car were looted. The killers’ total take was Patrolman Robbins’s revolver and $7.

After a short investigation, police arrested Alonzo Thompson (17) and Francis John Keegan (18), the latter in Charleston, West Virginia. Both were convicted of 1st Degree Murder.

Thompson was sentenced to Life Imprisonment. His charge was commuted to 2nd Degree Murder thirty years later on October 16, 1966. He was granted parole on December 15, 1966.

Keegan was sent to the penitentiary and later transferred to the Lima State Hospital and was still admitted there during December 1966.