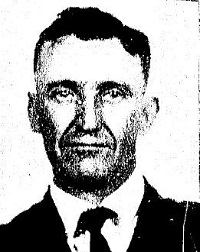 Joe was born March 15, 1883 to James J. and Bridget (Cosgrove) Duffy.  James was born in Ireland and immigrated to the United States in 1870.  Bridget was also Irish, probably born at sea, but given a birth country of Canada, and immigrated to the United States in 1860.  Within three years of immigrating, James married Bridget and had their first child of nine; of which, Joe was the middle child.

Joe attended Warsaw Public School for six years.  He then took a job as a Clerk at Cincinnati Hospital, probably from 1902 to 1907.

Joe joined the Cincinnati Police Department as a Patrol Wagon Driver on January 9, 1908.

Also during 1908, October 21, he married Ella Wenner.  During September 1909, they had their first and only child, a daughter.  Ella contract tuberculosis and by March 1916, she passed away at age 34.

During 1915, Patrol Wagon Driver Duffy was promoted to Patrolman, but still assigned to the Patrol Service, and assigned to Patrol 5 (Naeher Alley behind 1024 York Street).

On November 20, 1916, Patrolman Duffy remarried, this time to Paulina Maria Mahatcke and began to rebuild his family with her.  By the end of 1932, he had ten children.

Also by the end of 1932, Patrolman Duffy had been assigned to Patrols 1, 3, 5, and 9.  Though of ordinary stature, he had built a reputation of being able to handle the unruliest prisoners.  He was currently assigned to Patrol 3 at 316 George Street.

During Christmas morning, the men of Patrol 3 were expecting visitors.  Patrolman Duffy was on the 2nd floor cleaning windows when he fell to the sidewalk.  Such a fall is generally not fatal, but along with fractured ribs, he also fractured his skull.  He was taken to the General Hospital by Patrol 3 at 10:20 a.m.

Patrolman Duffy’s fourth child eventually joined the Hamilton County Sheriff’s Office as a Deputy and spent a good portion of his career in the Regional Enforcement of Narcotics Unit (RENU).