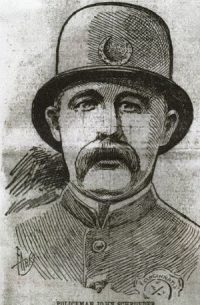 John was born March 8, 1858, the fifth of six children born to Friedrich Heinrich and Margarethe Friedricke (Finke) Schroeder; both of whom immigrated to the United States from near Hanover, Germany in 1846.  During 1868, when John was ten years old, his father joined the Cincinnati Police Department as a Patrolman.  He continued in that capacity until 1874; at which time he would have been 53.

Significant corruption and partisan hiring, promotions, demotions, and dismissals existed within the Department in the mid-19th century.  One response to these circumstances was to eliminate the Cincinnati Police Department altogether and build a new, non-partisan department.  So, on March 31, 1886, the entire Department was fired and on April 1, 1886, a Police Commission began hiring new officers.

On August 17, 1901, about 8 a.m., 8th District Sergeant Brinkman dispatched Patrolman Schroeder to a report of a downed Edison Company electrical wire at Charlton and Zeltner in Corryville.  It seems that several kite tails had, over time, been caught up in the wires and one wire burned through and fell to the ground.

Upon arrival, Patrolman Schroeder decided to move the wire to a safer location using his wooden nightstick.  While carrying the wire toward the attached utility pole, the wire slipped down on his nightstick and contacted his hand.  He was unable to let go as he was electrocuted.

An onlooker knocked the nightstick from the policeman’s grasp and others carried him to the home of Fred Dickman at the corner of Jefferson and Charlton.  The Police Surgeon Carson and Dr. Miller responded.

The doctors worked hard to save his life, but Patrolman Schroeder died about 9:30 a.m.

Upon hearing of the death, Colonel Philip Deitsch relieved Patrolman Frederick Schroeder of his duty in order to assist his brother’s family.

Soon after the death of Patrolman Schroeder, his widow and children were granted pensions:  Augusta $20 per month (No expiration date), Leonard $6 per month until November 1903, Charles $6 until October 1906, and George $6 until Sept 8, 1908.

Almost 42 years after her husband’s death, Augusta died of a heart attack on July 3, 1943 in the exact spot that Patrolman Schroeder was electrocuted.  She was buried with him in Walnut Hills.

Two years following his father’s death by an electric line, Harry Frederick Schroeder joined the Cincinnati and Suburban Bell Telephone Co as a lineman.  By 1928 he was a supervisor and retired after 45 years at the end of October 1948.   He died on March 8, 1955 at his home.

Leonard Schroeder married Rhea Mincovsky in 1920. They had no children.  He worked as a cashier in a bank and later was a plumbing contractor.  He died while at work on December 19, 1955.

Charles Schroeder married Carrie Bredemeier in 1914. They had one son, Jack. Charles was a roofing contractor and died June 2, 1962.

George Schroeder married Anna McLaughlin in 1918. They had no children.  He also was a plumber.  He died in Campbell County on October 19, 1978.