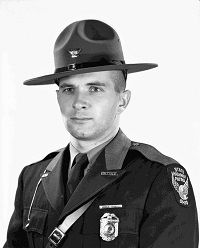 Later that year, Ernest enlisted in the United States Air Force.  While still an Airman 3rd Class and assigned to Vandenberg Air Force Base in California, he applied for a marriage license to wed Joan Elizabeth Brust (19), a typist from Milford Center, on March 20, 1960.  Airman Cole was honorably discharged during 1962.

Ernest joined the Ohio State Patrol as a Cadet and dispatcher at the Delaware Post on December 3, 1962.  He attended the State Highway Patrol Training Academy in Columbus, graduating on January 10, 1964.  He was appointed Patrolman and assigned to the Dayton Post.

On September 12, 1964, Mrs. Cole gave birth to their first child, a son.  By then, the new father had served his country and community for six years.

On first and second of October 1964, temperatures in southwest Ohio reached 80º F.  Then, on the morning of the third, the temperature dropped to 40º.  The difference between the air temperature and that of the moist ground produced numerous pockets of dense fog.  Interstate 75 was enveloped in thick fog slowing traffic to fifteen miles per hour at some points.  Reports of auto accidents began coming into the Butler County Sheriff’s Office just before dawn.

At 6:30 a.m., Kenneth Hall of Franklin was driving his car south on the superhighway, just north of Tylersville Road, when Roy Herbert Hammel (52) of Lima drove a tractor-trailer into Mr. Hall’s car, shearing off the left side of the car and killing Mr. Hall.  Other cars following tried to avoid the wreckage and piled up in a series of rear-end collisions and side hits.  The Patrol said at least twenty cars were involved in the crashes.  Ambulances from a wide area were sent to the scene; as were seventeen tow trucks, five Butler County Deputy Sheriffs, and a dozen Ohio State Highway Patgrolmen.

Patrolman Cole arrived on the scene and radioed headquarters that he was heading north to direct traffic passing south on the freeway.  He went a couple of miles and was setting out a flare pattern.  Dr. Garret J. Boone, Butler County Coroner, said Cole was directing Traffic with a flashlight At 7:30 a.m.  Gordon Samuels of West Alexandria drove his vehicle into the pedestrian patrolman.  The officer’s body was thrown 75 feet down the road and he was killed instantly.  Another multiple-car pile-up resulted.

A fund was set up at Dayton to help Patrolman Cole’s family.  All funds went to Mrs. Cole.

Hammell and Samuels were both arrested and charged with 2nd Degree Manslaughter, according to Sergeant Edward P. Goffos, commander officer of the Hamilton Patrol post.  They were then bound over the Butler County Grand Jury.  On January 28, 1965, the Grand Jury failed to indict either one.

If you have further information, artifacts, archives, or images regarding this officer, please contact the Greater Cincinnati Police Museum at Memorial@Police-Museum.org.