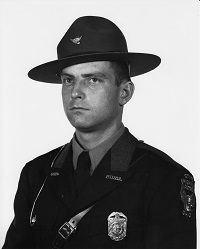 Earl joined the Navy as an 18-year-old on June 26, 1945 and served on the USS Yorktown (CV10) aircraft carrier during World War II.  He was honorably discharged on July 14, 1946.  He re-joined to fight in the Korean Conflict where he served as a Seaman 1st Class on the “Fightingest Ship in the Fleet”, the USS Essex (CV9) aircraft carrier.  Again, honorably discharged on September 15, 1950.

After years of fight for our country, he joined the Ohio State Highway Patrol in 1952.  By October 1953 he was assigned to the Cincinnati Post and living with his wife and daughter at 7120 Plainville Road in Deer Park.

On October 19, 1953, Patrolman Casterline drove his patrol car on Kemper Road in Sharonville, Ohio.  As he crossed the Pennsylvania Railroad tracks, a train, obscured from him by trees and shrubs, struck his patrol car.  He suffered a fractured skull and intracranial hemorrhage.

Patrolman Casterline was transported to General Hospital and was pronounced dead on arrival.

Patrolman Casterline was survived by a wife, Carol Ann Casterline, and a daughter.  He was buried in Section K, Lot 352, Grave 2, Rest Haven Memorial Cemetery on October 22, 1953.