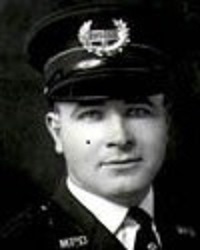 Dan was born February 8, 1902 in Breathitt County, Kentucky to farmers, Elisia and Ella (Morris) Sandlin.  By 1920, Elisia moved his family to Middletown.  When Dan was 20 years old, he married Mabel Nancy Amburgey on July 6, 1921.  During the next eight years, they produced three children.

Dan joined the Middletown Police Department on September 22, 1928; about the same time his brother, Detective Carl Sandlin, had to resign due to health problems.

By 1930 he and his family were living at 900 Auburn Avenue at Henry Street.   Patrolman Sandlin was highly respected by all that knew him and was regarded as one of the best men on the force.  On or about March 6, 1930, with less than two years on the Department, he was promoted to Night Desk Sergeant.  It was in this capacity that he went to work on the night of March 19, 1930; in charge of Headquarters.

Richard Brewer was born August 24, 1892 in Laurel, Kentucky.  He was drafted into the United States Army during World War I on May 1, 1918 and discharged less than six months later on November 20, 1918.  During 1920, he was working as a laborer in construction and living on Wallace Street in Hamilton with a wife and two children.

He had a criminal record in Kentucky, including shooting a police officer – for which he was on parole – and an arrest for a cutting.  During 1930, having been incarcerated in the Butler County Jail on a liquor charge, his first wife died, and the Butler County Commissioners paroled him so that he could attend the funeral.  He had another wife at home and three children from the previous marriage.

On or about March 13, 1930, he was involved in another cutting incident when he slashed Olney Wells.  It is very likely that the stabbing was interlaced with the mob and bootlegging.  Wells was the man who shot and killed Prohibition Agent Robert O. Gary when he tried serving a search warrant at his bootlegger-friendly bar in 1925.  Wells had “inherited” the bar a few months earlier after mobsters put a hit on the previous owner, Edward Schief, because he was buying whisky from the “wrong” organization.  Two of Schief’s murderers later killed North College Hill Marshal Peter Dumele in 1928 during a robbery intended to obtain cash to be used to post a bond in Hamilton – possibly for Wells.  The same two killers were involved in Al Capone’s St. Valentine’s Day Massacre in Chicago in 1929.

By March 1930, Brewer was known to carry a German Luger.  Not only was he wanted for Cutting With Intent to Kill, he would almost certainly have been violated on his parole if caught.  He was trying to leave Middletown and make his way back to Kentucky.  William Meeks (37) of 1514 Plum Street, the brother of a friend of Brewer’s, was trying to help him.

Wilson Henley Griffith (48) and Roland Griffith, 36, of New Castle, Indiana, while probably indulging in alcohol at times, do not seem to be the sort to commonly carouse with the likes of Brewer.  At the time, they were living and working in Middletown and apparently commuting from New Castle.

Wilson Griffith said that he and his brother arrived in town on March 19, 1930 and that they met Meeks at Clark Street and Fleming Road.  Meeks asked Wilson to take the brother of a friend of his to a place on Ninth Avenue so he could start today for Kentucky.  They agree.  The man, Brewer, whom they said they had never met, then wanted to see his sister on South Avenue.

Middletown Police Chief Otto Kolodzik had just issued orders to be on the lookout for out of region license plates due to a series of burglaries.  Patrolman Porter, from an outlying district, telephoned Desk Sergeant Sandlin at headquarters about 11:00 p.m. to inform him that an automobile loaded with four men and bearing Indiana license plates had just passed him.  Sergeant Sandlin boarded a patrol car with rookie Patrolman Roy to go in search of the vehicle.

They found the car in front of a well-known booze establishment on Crawford Street near South Avenue with three men sitting in the car.  The officers knew these were probably not burglars but bootleggers or customers of bootleggers.  Patrolman Roy Crout later recounted, “We got the fellows’ names and they said there was another fellow inside.”  With insufficient evidence, but very suspicious that they were committing a crime, the officers told them that it was not a good place to sit and the officers left.

Patrolman Crout explained, “We thought it was a bootleg joint and we went around the corner of Crawford and South and some lady put something in the car and Brewer jumped in and they started [to drive] away.  They turned their lights out and we followed them a block and stopped them.  Dan [Sandlin] said, ‘Watch your step.’  Dan went to the right side and I went on the left.”

It is not known whether Sergeant Sandlin recognized at that distance that it was Brewer who got into the right rear seat, but he had known Brewer for a couple of years and knew that Brewer was wanted for the stabbing of Wells.

Shortly before midnight, Brewer jumped got out of the car and ran and Sergeant Sandlin caught him quickly.  From Patrolman Crout’s perspective, “Brewer leaped onto Dan and started shooting.  He fired two or three shots so fast I couldn’t tell how many.  As soon as Dan fell, Brewer whirled, and I shot twice.  I think I hit him in the stomach both times.  He then ran toward one of the other men [Wilson Griffith] as if to hand him the gun and I shot him again but didn’t do him any damage.”  It was dark and when it looked as if he was handing Wilson Griffith the gun, Patrolman Crout shot Wilson.

Patrolman Crout continued, “Brewer ran east on South Avenue yelling at the top of his voice all the way.  I had shot my gun empty and I took Dan’s and fired two shots, but he was a block and a half away.”  Wilson Griffith tried to run, but he did not get far.

Wilson Griffith and Patrolman Sandlin were rushed to Middletown Hospital.  Wilson Griffith was shot six times in arms, legs, side, and back.  He was placed under guard.

Sergeant Sandlin suffered multiple gunshot wounds.  One bullet penetrated his right chest and severed a large ventricle of the heart.  At the hospital, he stated between gasps: “I told Brewer to stop…  He ran…  I said, ‘Don’t run.’  He ran and shot me…  I don’t know how many times he hit me…  He hit me first when in a tussle.”

Brewer, with a bullet wound to the wrist, walked more than six miles to the Monroe Cemetery and hid there until Thursday night.

Immediately after the shooting, every Middletown officer was called out to conduct a search and descended on the city expecting that without their vehicle the suspects had no opportunity to flee Middletown.  Police knew Brewer was wounded.  His overcoat was found in a field with a bullet hole and blood-soaked sleeve.

By 2 a.m., it had become a massive manhunt, including Hamilton Police and every department in the Miami Valley my mid-day and involving at least two states.  It was considered by observers to be one of the greatest manhunts in the history of the City of Middletwon.

Coroner Edward Cook responded and ordered the suspects’ companions held as material witnesses under $2500 bonds.  He also ordered the bullets that Griffith had in his body to be held to determine if it was Brewer or Patrolman Crout that shot him.  But he eluded them.

A warrant was signed against Brewer on the 20th for First Degree Murder.

On March 21, 1930 at 6:30 p.m., probably acting on one of many tips and not certain this one would pan out any better than the rest, Middletown Detective Ray Fraser, Big Four Railroad Sergeant F. F. Pierce, Butler County Deputy Sheriff Tom Davidson, and three Middletown officers went to the home of Glenn and Callie Brandeburger at Kyles Station.  She admitted that Brewer was inside and asked the officers if she could talk to him first, otherwise there would be a gunfight.  They permitted her to try and she was able to retrieve his loaded .45 Automatic Colt Pistol from under his pillow without waking him.  He was arrested without incident.  Brewer made no attempt to deny the involvement in the murder.  He said, “I’m mighty sorry I did it.”  He was taken to the Butler County Jail due to a crowd forming that the Middletown Jail.

Mr. and Mrs. Brandenburger were arrested and held under $5000 bond for harboring the fugitive.

Surgeons had fixed all of Wilson Griffith’s wounds early on the morning of the 20th, and he was expected to survive.  But, by the next day, he was listed in critical condition.  Griffith died on March 26, 1930 of peritonitis due to a bullet wound of the bowel.  He was buried on March 28, 1930 in New Castle, Indiana.

Butler County Prosecuting Attorney Benjamin F. Primmer recalled the grand jury for Monday, March 24, 1930.  The grand jury returned indictments for First Degree Murder and Murder of a Policeman While in the Line of Duty.  Brewer hired John P. Rogers to defend him.

They also indicted Glenn and Callie Brandeburger for Harboring a Fugitive From Justice.

On May 1, 1930, a jury was selected, and Brewer’s trial began.  After several days the case was given to the jury.  On May 10th the jury reported they were deadlocked.  It was later reported that a single juror would not vote to convict for 1st Degree Murder, 2nd Degree Murder, or even Manslaughter.

However, he was imprisoned little more than ten years.  During 1940 he was imprisoned on the London Prison Farm in Madison County.  By October 1942, he was living in West Virginia.  At 80 years of age, he died in the Dayton Veteran’s Administration Medical Center on April 17, 1973 and is interred at the Hill Grove Cemetery in Miamisburg.

We know of only seven line of duty deaths of Middletown Police Officers in the 20th Century and five died during Prohibition.  Sergeant Sandlin was the fifth to be fatally shot in the performance of their duty since 1926.  The previous four were Patrolmen Charles Skeen, George McChesney, Harold Roth, and Elbert Crout.   We believe there is another Middletown officer’s line of duty death in the 19th Century – perhaps named “Moyer” – but have found little account of it.

Mrs. Sandlin took her children to Springfield in Clark County, Ohio and worked as a saleslady.  She died there on March 20, 1936, almost exactly six years after her husband, at the age of 32, from Pulmonary Tuberculosis.  We do not know where the children, ages 10 to 14 by then.  By 1940 they were living with three separate families in Clark County.

Between the two trials of Richard Brewer, Mr. and Mrs. Sandlin lost another son, former Detective Carl Sandlin, who resigned from the Department in 1928 and died in Hendersonville, Virginia on October 24, 1930.

Though not totally innocent, Wilson Griffith was unarmed and, before he died, claimed to know nothing of what Brewer was doing or who Brewer was.  The prosecutor did not want to make the decision on whether the rookie patrolman, Roy E. Crout, acted prudently in shooting him under the circumstances.  He was charged with Manslaughter and, for the 2½ days it took to get it to the grand jury, suspended from the Department.  He was exonerated, went on to be a hero Patrolman, a Detective Sergeant, and retired near the end of the 1960s as a Detective Lieutenant.

If you know of any information, archives, artifacts, or images regarding this officer or incident, please contact the Greater Cincinnati Police Historical Society at Memorial@Police-Museum.org.