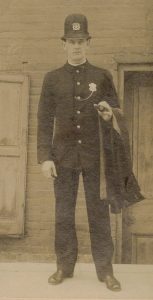 Charles Kneisel was born May 5, 1882 in Cincinnati to German and French immigrants, Mathias and Mary (Demith) Kneisel.  He attended public schools.  From about 1906 to 1911, he worked as a coachman clerk.

Charles joined the Cincinnati Police Department as a Substitute Patrolman on April 5, 1911.  He was promoted to regular Patrolman May 3, 1912, issued Badge 306, and assigned to District 1.  During the great flood of 1913 he conducted himself above and beyond the call of duty when he and Patrolman Harry Weller rowed to the second floor of old Ben Franklin House.  A pontoon bridge that had been constructed in the morning had come undone and the wreckage was forcing a flow of water at and into the building.  Patrolmen Kneisel and Weller worked on and finally freed the damaged pontoons, possible saving the building.

He transferred to District 8 and then in 1919 to District 10.  When District 10 was renumbered as District 5 in 1923, he was assigned to Mounted Patrol.  During 1924, he and Patrolman Phil Vorherr made the news when they captured Alton B. Arnett, an armed burglar who was also wanted for the shooting of a railroad detective in Nashville, Tennessee.

When the Mounted Patrol was terminated in 1927, he went back to regular patrol in Cumminsville.

On December 17, 1937 Patrolman Kneisel was dispatched to a trouble call at Mohawk Street and Stonewall Avenue.  On the way, the scout car he was driving skidded on a streetcar track and careened into a loading platform in front of 3043 Clifton Avenue.  Robert Feldhaus and John Kohnle, both of Walnut Hills, were the first on the scene, extricated Patrolman Kneisel who was suffering from a crushed thorax and hemorrhage, and carried him to Good Samaritan Hospital about a block away.

He died as he was being taken inside.

If you know of any information, artifacts, archives, or images regarding this officer of the incident, please contact the Greater Cincinnati Police Museum at Memorial@Police-Museum.org.