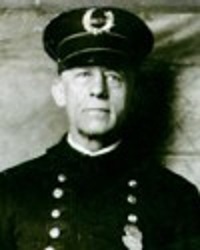 About 1909 at 33 years old, Gus started working as a shear-man at the Newport Rolling Mill and he would work there for 21 years.  He and Mrs. Schoo were living at 526 Lindsey in 1909 and they would live there for the rest of his life.  He was also a member of the Moose Lodge and of the Sons of Pioneers.

We have no other information regarding his first 48 years.

On March 20, 1924, three men resigned from the Newport Police Department, citing a lack of pay as their reason.  The Newport commissioners appointed three replacements, including Gus.  He soon became a model patrolman and his name graced the newspaper regularly with his arrests of bootleggers and/or dangerous, armed criminals.  During 1929, he shot and killed and armed burglar.

On April 1, 1930 he was reassigned to the First Ward, partnering up with newly promoted Patrolman Edward Buckingham.

Carl Robert Besse was born in 1906, the oldest of nine children born to German immigrants Charles B. and Anna (Moran) Besse.  Charles owned a successful grain and feed store and was a member of the Holy Name Society of Sacred Heart Church in Bellevue.  His next oldest son went on to be a Bellevue Councilman who resigned to fight in World War II.  His next two sons would become Jesuit priests.

But Carl was a problem from his earliest adolescence.  When he was fifteen, he ran away from home to follow a circus that had just left Newport.  Bellevue Chief of Police Charles Egan went to Ripley, Ohio to find him and bring him home.  At twenty, his father felt it necessary to get him out of Bellevue and sent him to Charleston, West Virginia to learn a trade.

Two years later, November 2, 1928, Carl was working as a Constable for the disreputable Magistrate Chester W. Dorsey’s court in Bellevue, making raids on stills and gambling houses in Campbell County.  His and Magistrate Dorsey’s partnership soon dissolved, and they were forced to retire November 14, 1928; partially due to a scandal regarding the destruction of slot machines and seizing of cash without criminal charges.

Carl was immediately re-employed by a Campbell County Court as a Constable and his activities – some said antics – put him on Page 1 of the newspapers dozens of times during the next several months.

It became unclear as to whether he was a warrior for the law or using the law for his own purposes.  Less than three months into his law enforcement career, during January 1929, he and others were sued for an illegal search.  On March 23, 1929, the Enquirer poked fun at the constable for “one of the smallest stills ever seized in a raid.”  He had become known as the “Raiding Constable” when, on March 25, 1929, he announced a “war on speeders and ‘spooners’ on the highways and byways of Campbell County.”

Several days later, Constable Besse forced to the side of the road a vehicle containing four youths between the ages of 19 and 20 who were, from all information known, out for a drive and having no criminal intent.  They did not know Besse, nor that he was an officer of the court and, fearing that he was a robber, they sped away.  Besse emptied his revolver into the car, barely missing two of its occupants.  Besse, upon learning the name of the driver, signed a warrant for speeding.  Judge William C. Buten issued warrants for Malicious Shooting Without Wounding against Besse on April 1, 1929.

His antics continued, however, and within a week it was noted that he was conducting his raids accompanied by his wife, Loretta.  While conducting a raid with her on April 7, he accidentally shot himself in the ankle.  Because of the wound, he was unable to appear in court on the malicious shooting charges on April 11, 1929.  It appears to have been his last activity on behalf of the Campbell County Court.  It seems some slot machines had disappeared after one of his raids and he was indicted by a grand jury on fourteen more charges.  Thus ended his half-year career as a Campbell County law enforcement officer.

On June 22, 1929, the Campbell County Court Grand Jury announced 88 indictments, including four for Besse’s shooting.  Then he was sued again by a business that sold him suits for which he failed to pay.  His criminal trial date was set for November 12, but he failed to show.  At the request of his lawyer, the case was continued to December 4th.  Two days later, his wife sued for divorce alleging that with his temper, her life was in danger.  He appeared on the 4th and convinced the judge that he was not trying to dodge the charge and was released on bail.  He would never be tried.

Newport Police arrested him on February 10, 1930 for another raid, but this time he was acting on his own and robbing a gambling joint.  Somehow, Besse was released again, probably on bond.

On May 1, 1930, a badly burned and decomposed body was found washed up on the banks of the Great Miami River at Lost Bridge near Miamitown, Ohio.  Soon after, Charles Besse advised law enforcement that he had not heard from his son for six weeks.  He reported receiving a phone call on the day the body was located in which the caller said, “Well, we got your son for good.”  It was a ruse.  Whether or not his father knew it to be is questionable, but it seems clear that Besse murdered a man of his own height and weight, burned him, set him in the river, and when the body was found called or had someone call his father.

Being all but declared dead, with the divorce, civil suits, and criminal charges attributed to a dead man, Besse continued his criminal career – which he fumbled as badly as his law enforcement career.

On June 13, 1930, Besse, asserting his home to be Cleveland but using his real name, married Alice Blackburn in the Butler County Probate Court.

A day into his honeymoon, he and others held up the Pastime poolroom in Franklin, Ohio taking $800 (the 2020 equivalent of almost $12,500) in loot.  After the robbery, Besse drove the stolen getaway car to Newport to abandon it.  He went to Saratoga Street and was leaning against a light pole, undoubtably waiting to be picked up – probably by the new Mrs. Besse.

At 11:22 p.m. on June 14, 1930, Patrolman Schoo was by himself at Third and Beech Streets because his partner, Patrolman Buckingham, had gone with Patrolman Harry Derrick to check out a fight report at Third and York Streets.  Patrolman Schoo boarded a Bellevue-Dayton streetcar and rode to Third and Monmouth Streets.  After speaking with a woman at Fourth and Monmouth Streets, he walked to Ware and Kilpatrick’s garage at Fourth and Saratoga Streets and talked to employees Charles McCann and Lorel Dean.  All seemed quiet on his beat.

Witnesses saw him walking north on Saratoga Street where he spotted Besse standing against the pole.  Undoubtedly, he knew Besse, but at the time Besse had no outstanding warrants and was technically in process for his other crimes.  Maybe he did not know that Besse was being presumed by some to be dead; or maybe that is what they talked about as they walked east on Third Street toward Washington Avenue.  But Besse, who knew that Newport Police would find the abandoned car and that Patrolman Schoo would identify him as (1) alive, (2) the likely auto thief, and maybe (3) the poolroom robber.

They stopped in front of 328 Washington and Besse stepped back a few steps, pulled a .45 caliber semiautomatic pistol, and fired three shots into Patrolman Schoo, striking him in the head, shoulder, and torso, while saying, “Now, damn you, I got you.”

Police responded and found Patrolman Schoo dead at the scene from hemorrhaging of the liver and subclavian vessels.  His sidearm was still in his holster.  His remains were removed to Speer Hospital.

Patrolman Schoo was survived by his wife, Missouri (Dance-Bauer) Schoo, and two stepsons, Clarence M. Bauer and Ferdinand Henry Bauer.  A Requiem High Mass was celebrated at Corpus Christi Church in Newport.  Pallbearers included Patrolmen Harry Derrick and Edward Buckingham, the last two officers to see him alive.  He was buried in Evergreen Cemetery in Southgate.

Newport Safety Commissioner James Fuller directed the investigation.  Investigators found two empty .45 caliber casings in an alley between Washington and Park Avenues.  The autopsy determined that a .45 caliber had been used to kill Patrolman Schoo.

The motorman and an occupant of a Ft. Thomas streetcar heard the shots and saw Besse flee toward Fourth Street and down an alley.  A woman heard the shot, then heard a man running through the side yard of her home on East Third Street.  He tripped and fell over steps in her side yard and the next morning she found a straw “Panama” hat.  It contained a label indicating its manufacturer.

By June 16, 1930, the Newport Police Department, mayor, and safety commissioner had pushed themselves to the limit to identify the assassin.  Also on the 16th they determined that the hat was manufactured in Champaign, Illinois and they hoped to find where it was retailed.  On June 18, 1930 police found the hat had been sold in Champaign, but that the company did not keep any records of who purchased it.

On June 24, 1930, Besse, Harry Adams, Eddy Myers, and Jack Dunkin, robbed the First National Bank of Noble, Illinois garnering $10,000 in cash and $30,000 in negotiable securities (almost $600,000 in 2020 dollars).  There was a an eight-hour, almost fifty-mile pursuit north to Toledo, Illinois where they abandoned their stolen car and ran into a wooded area.  Adams and Myers gave up almost immediately.  Sheriff Dave Glenn organized a posse of some 200 men and surrounded the woods.  Besse and Dunkin attempted to flee down a road but were caught by the posse.  Besse walked toward the posse, suddenly pulled a .45 semiautomatic Colt pistol, and shot one of the deputies, a Toledo druggist, Everet Woolen.  Woolen and other deputized militia returned fire, killing Besse.

Papers in the dead man’s clothing indicated that he was from Cincinnati and local law enforcement was notified.  Police began to back track Besse’s life from the time he was killed by police to his last known location in Campbell County.  They found he had married a woman from Champaign, Illinois.  They discovered his involvement in the holdup of the Pastime poolroom in Franklin, Ohio.  The car linked to the poolroom holdup was found abandoned in Newport the day after Patrolman Schoo’s shooting.  All the witnesses were re-interviewed and all identified Besse as the man with Patrolman Schoo.  A new witness identified Besse as the man who hijacked his houseboat for a trip across the Ohio River to Cincinnati after the Patrolman Schoo shooting.  The case was closed with Besse as the killer.

Besse’s body was brought to Cincinnati and buried in Section 6, Range 7, Grave 20 at St. Joseph Cemetery.

Besse’s father never accepted that his son murdered Patrolman Schoo.  During 1942, he took his own life.

Widowed twice, Mrs. Schoo did not marry a third time.  A year after Patrolman Schoo’s death, she was diagnosed with arteriosclerosis.  She died of it twenty years later at the age of 92.