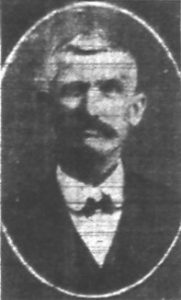 William was born December 31, 1854 in the Walton District of Boone County to Kentucky-born farmers, John S. and Catherine (McClure) Johnson.   He also took up farming and during the late 1870s took a wife, Emily, who he called Emma.  Their first child, Lawrence Johnson, was born during 1877, but died soon after birth.  Between 1879 and 1900, they had ten more children, one more of which, Ruth K. Johnson, died as a child.  William continued farming on Covington-Lexington Pike well into his 60s.

During the 1920s, Walton’s Town Marshal worked during the daytime and the merchants of Walton hired a merchant policeman at night. Getting too old and farm, William took the Merchant Policeman position.

During the evening of January 10, 1929, Leroy Milton (24) and Thomas Brewer (22), both of Middletown, Ohio, and Charles Keplinger (23), of Trenton, Ohio, met at a pool hall in Middletown.  Brewer had a date later that night with a woman in Hamilton and Milton had a .38 caliber revolver he planned to sell to his brother-in-law in Covington.  But they had no transportation.  They found and stole a car in Middletown.  In the car they found another pint of whiskey, which they drank.

They drove to Hamilton, but Brewer’s date wasn’t home, so they drove to Kentucky.  When they got to Newport, they purchased another pint of whiskey and drank it.  When they arrived at Milton’s brother-in-law’s house, they found the lights turned off.

Someone suggested they rob a streetcar.  On January 11, 1929, about 1 a.m., Milton and Keplinger hopped onto a streetcar at 5th Street and Madison Avenue and robbed the conductor, Clyde Menifee, and Motorman, Whitney Preston, of $10.  Brewer waited for them in the parked car and made good their escape.

They drove further south to Elsmere where they determined to break into Robert Jones’ store on Dixie Highway.  Jones was asleep inside when Keplinger broke the glass.  He woke up and fired a couple of shots at the trio, none of which took effect.  The three fled.

Still headed south on Dixie Highway, they went to Walton and now set their sights on the Kroger store at 24 North Main Street next to the Phoenix Hotel (now Gross Insurance Agency and Walton Florist & Gifts).

Merchant Policeman Johnson was stoking the furnace at the Walton Equitable Bank Building (now U.S. Bank) at 27 North Main Street, across the street from the Kroger’s store, when the three were breaking into the store.  He saw Keplinger and Milton breaking in the front door and came over to investigate with his revolver in hand.  Only the criminals know what happened next and they disagree, but the result was Policeman Johnson was shot in the abdomen.

When the shooters sped out of town the citizens came to the officer’s aid.  He was taken to Booth Hospital in Covington.

Policeman Johnson died later that day at 1 p.m. of a gunshot wound to the abdomen, kidney, and stomach becoming, by far, the oldest law enforcement officer to have died in the line of duty in the eight-county region.

Town Marshal W. Dickerson responded to the scene of the shooting and formed a posse.

The shooters drove into Grant County and through Dry Ridge before they ran out of gas near a farm owned by Fred Conrad near Williamstown.  They walked to a restaurant to get something to eat.  Grant County Deputy Sheriff Walter Conrad found the abandoned car with Ohio license plates, then found the men in the restaurant, and arrested them.  They were identified by witnesses in the streetcar robbery and the Walton shooting and taken to the Boone County Jail in Burlington.

Boone County Sheriff L. T. Utz interrogated the three and they admitted that they held up the crew on the streetcar.  Milton admitted firing the shot into Policeman Johnson.

With fears of lynching, the murders were moved to the Covington jail.  They were indicted by a Boone County grand jury on January 26, 1929.

Milton’s trial for Murder of the 1st Degree began on March 11, 1929 before Judge J. C. Vallandingham in Boone Circuit Court in Burlington.  It was the first murder trial in Boone County in seven years.  There was much discussion bandied about as to whether the death penalty could be returned there, considering that the last (and only) time it had been was for a slave in 1849.  John J. Howe of Carrollton and Horace Root of Newport defended him.  The case was prosecuted by Boone County Commonwealth Attorney Ward Yeager, Boone County Attorney B. H. Riley, and John L. Vest.  In all, 24 witnesses testified, and Milton admitted to shooting Policeman Johnson.  On March 16, after deliberating 7 hours, the jury found him guilty and he was immediately sentenced to Life Imprisonment at the Franklin Reformatory.  He served only eleven years when, at the age of 35, he was paroled on August 7, 1940.

Brewer’s trial was next, beginning July 22, 1929 in Owenton, because he had won a motion for a change in venue.  His attorneys were John Howe of Covington, Henderson Estes of Middletown, and A. Floyd Byrd of Lexington.  The first trial ended in a mistrial with the jury could not agree on his guilt as the driver.  Of the twelve men, eleven had voted for acquittal.  The second trial, in Burlington, was held on December 13, 1929.  This time, Milton was brought in to testify that he had fired the fatal shot and that Brewer stayed in the car during the gunfight.  On Sunday, December 15, Brewer was convicted of Manslaughter and given a 10-year sentence.  He died a year later of spinal meningitis.

The day after Brewer was convicted, on Monday, December 16, 1929, Klepinger pleaded guilty to Complicity and was sentenced to fifteen years.  He served little more than half and was paroled on January 30, 1937 at the age of 30.

If you have information, artifacts, or images regarding this officer or incident, please contact the Greater Cincinnati Police Museum at Memorial@Police-Museum.org.