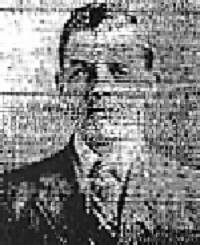 Leslie was born January 29, 1889 to Samuel T. and Georgia P. (Billeter) Johnson.  He worked as a laborer on farms most of his short adult life.

Leslie met and married Lyda C. McLaughlin of Maysville, moved to Covington, and started a family.

During March 1915, Leslie joined the Chesapeake & Ohio Railroad as a Detective and was living at 1211 Russell Street.  Though he had served only three weeks, he impressed his superiors with his efficiency, and they were about to promote him.

On March 25, 1915 Detective Johnson was making his rounds in the Silver Grove railroad yards about eight miles upriver from Newport.  Just before 10 p.m., yard workers heard a couple of gunshots.  They sounded like railroad torpedoes going off and they did not pay much attention to them.  Soon after, near the foot of the “hump” in Yard 4, Conductor Stannard Mitchell found Detective Johnson on the ground with a gunshot wound to his forehead above his right eye made by a .32 caliber bullet.

Mitchell and others loaded the detective onto a special engine and transported him to Speers Hospital in Dayton, Kentucky.  Doctors Garrison and Young probed the wound and concurred that he could not live past morning.

He survived that day and most of the next.  While he talked, it was not in response to any rational impetus.  He died on March 27, 1915 shortly after 10 p.m.

Campbell County Sheriff Grosney, Deputies Imfeld and Dramer, and County Patrolmen Manwaring and Heskins responded to the scene of the shooting.  They found one shot had been fired from the detective’s revolver.  During the next morning, Patrolmen Manwaring and Heskins arrested two brothers, Thomas Yates and Fred Yates, for Trespassing.  They resided near Silver Grove but were not charged in the murder.

By March 30, 1915 Kentucky Governor authorized the payment of a reward for the capture of the murder(s).  Also by the 30th, the investigators were connecting the murder to other murders of C&O Railroad Special Agent Cleveland Kemp in June 2014 and B&O Detective Lieutenant Elijah Boileau in February 2015.  There were rumors that an organized gang of thieves had a large cache of plunder from railroad car thefts and were shipping the stolen goods to other places via the River.

On April 1, 1915 Covington Private Police Officer Martin J. O’Herron was walking near the L&N Railroad Yards on Wallace Avenue when he was assaulted and killed.  It appears no one was ever identified.

On April 2, 1915, at 3 p.m., Detectives Center and Gernhardt arrested Earle Smith (19) of 25 Parsons.  Smith admitted being on a coal car on the night of Detective Johnson’s shooting and that he witnessed the shooting.  He said that Detective Johnson tried to board the train and that one of the trespassers aboard, possibly a Hungarian, pulled a firearm and shot him.  He said he could not identify the shooter.

Also on April 2, Coroner James M. Digby held an inquest in Newport.  YMCA employees, George Carwell and H.G. Phelps testified that they saw a man running from the scene of the shooting carrying a lantern, but that they could not identify the man.

On April 16, 1915 a Switchman, L. Archie Howley, was murdered in the same yards.  He was considered a “very important witness” in Detective Johnson’s murder.

On April 20, 1915 Cincinnati Patrolman James O’Neill was killed in the Big 4 Railroad yards directly across from Ludlow, Kentucky.  The perpetrator was identified, captured, and charged, but not convicted.  Then, on August 18, 1915, CNO&TP Railroad Detective Elmer Colby Matthews was killed aboard a train car when he discovered men inside one of the cars as it passed through Ludlow, Kentucky.  These killers were found and convicted.

There is no evidence in our research that indicates that any suspect was ever identified in the murder of Detective Johnson or if a gang was at work in this spate of murders.  Nor is there any referenced indication that the murderers involved in Patrolman O’Neill’s or Detective Matthews’ murders were related to those of the other railroad yard murders.  However, the murders did stop after Detective Matthews’ murderers were convicted and sentenced to life in prison.

If you have information, artifacts, archives, or images related to this detective or incident, please contact the Greater Cincinnati Police Museum at Memorial@Police-Museum.org.