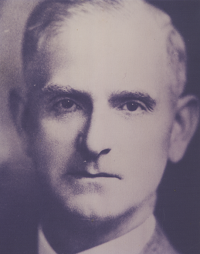 On January 23, 1947, Detective Seebohm left his home at 1752 Cedar Avenue in his assigned, city-owned Chevrolet and drove toward Detective Headquarters, traveling south on Hamilton Avenue, then south on Apple Street in Northside.  Meanwhile, William K. Carpenter of Dexter Avenue in Lockland was driving a Valley bus west on Cooper Street.

Detective Seebohm was into the intersection some 22½ feet at 7:35 a.m. when the speeding bus struck his vehicle.  The resulting collision destroyed Detective Seebohm’s vehicle and forced both vehicles onto the sidewalk at 1629 Cooper.  Detective Seebohm suffered traumatic injuries.  He was dead on arrival at the General Hospital.

Captain Elbert, Highway Safety Bureau, conducted the investigation and charged Carpenter with failing to yield to the detective’s right of way and Reckless Driving.

Sadie joined her husband one day shy of five years later in 1952.  Major Seebohm marched in every Cincinnati Police Memorial Parade until his death at 94 years of age in 1973.

If anyone has any information, artifacts, or photographs with regard to this officer or incident, please contact the Greater Cincinnati Police Museum at Memorial@Police-Museum.org.