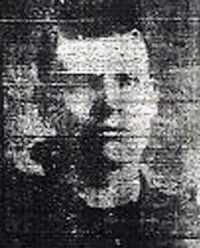 On Thursday, November 13, 1902, at a saloon directly across from the Covington Police Department, off-duty Covington Patrolman Robert Brown (33) had become intoxicated and started a quarrel with two other patrons.  Kenton County Deputy Bodkin, of Ludlow, and his partner, Deputy John D. McInerney, who was the son of the Kenton County Sheriff, were called to the disturbance.  As they attempted to separate the group, Brown pulled a handgun shot both deputies.

The deputies were rushed to St. Elizabeth Hospital in Covington.  Deputy McInerney survived his wounds.

Deputy Bodkin was pronounced dead with a gunshot to the abdomen.

Deputy Bodkin was survived by his wife, Emma Louise; five children, Margaret (13), Thomas (12), Samuel (11), Nicholas (8), and Morgan (3 months); and four siblings.  On Sunday, November 16, 1902, Deputy Bodkin’s remains were viewed at his home in Ludlow.  On Monday, November 17, 1902, his body was removed to St. James church for a 9 o’clock Requiem High Mass concelebrated by Reverend Fathers Kehoe and McGaffey.  It was the largest funeral in Ludlow’s history and included the entire Ludlow Fire Department.  He was accompanied by the Catholic Knights of America and every carriage available in Newport and Covington to St. Stephen’s Cemetery where he is buried.

Brown was arrested and tried, but his case was dismissed when the jurors could not agree on a verdict.

Then, one of the jurors, Daniel Hogan, was arrested on a warrant sworn by Deputy Sheriff Collopy charging Hogan with perjury, having lied about his familial relationship with Brown.

Brown was retried.  On April 21, 1904 he was found guilty of Voluntary Manslaughter.  Judge Shaw of the Circuit Court sentenced Brown to two years of hard labor.

Deputy Sheriff Bodkin was added to the Kentucky Law Enforcement Memorial Monument on May 17, 2011.