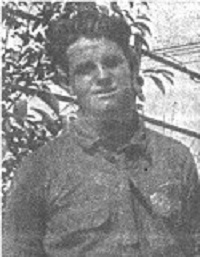 Bud was born June 6, 1901, in Cincinnati to George Louis (of Ontario, Canada) and Henrietta (Grosheim of Kentucky) Seaman. He was 13 years old and the oldest son of five children when, on October 27, 1914, his father died. He found employment at the John Shillito Company. By 1918, as a 16-year-old, he was driving a truck and his mother remarried. During 1922 he was still listed as Chauffeur and also a salesman for the Cincinnati Parfay Company at 552 W. McMicken.

During 1915, even before Ohio’s 1919 Prohibition laws, Hamilton County Commissioners recognized a problem with alcohol abuse in the unincorporated area between College Hill and Mount Healthy at public picnic areas. They created North College Hill in December 1915 for the expressed purpose of electing a Marshal to police those areas. Born from that mission, it is highly likely that the Marshals elected by the new villagers were intended to focus on alcohol enforcement, especially after Prohibition set in. But Federal Prohibition Agents arrested the sitting Marshal, J. L. Pierson, in January 1923. We believe that North College Hill appointed J. W. Smith to complete his term.

On May 7, 1923, The Cincinnati Enquirer reported that Bud was a Hamilton County Sheriff’s Office Motorcycle Patrolmen when he and Deputy Thomas Opel and Wyoming Speed Officer Jack Adler chased three auto thieves in a running gun battle. Soon thereafter, Bud was a Deputy Marshal in the Village of North College Hill. It is possible that he was already an Assistant Marshal and that his Sheriff’s Office employment was misreported. By day, he was still driving a truck.

On June 12, 1923, while Deputy Marshal Seaman was riding in the sidecar of the North College Hill motorcycle operated by newly appointed Marshal J. W. Smith, they were struck by an on-coming automobile on the Dayton Pike (now Cincinnati Dayton Road) about two miles above Sharonville, Ohio (we believe in or near Pisgah, Ohio) and forced into a ditch. There is no known record indicating why they were 15½ miles from North College Hill, but chasing a suspected bootlegger was a common activity at the time. Both officers were injured and taken by private conveyance to General Hospital in Cincinnati at 1:24 a.m.

Marshal Smith had a broken toe and facial lacerations. Deputy Marshal Seaman had a head injury that was, at the time, not considered to be serious.

He was predeceased by his father, George Seaman. Deputy Marshal Seaman was survived by his mother, Henrietta (Grosheim) Seaman Deschene; stepfather, John Deschene; siblings, Alberta Seaman (24), Marguerite Seaman (19), Evelyn Seaman (16), and Willis Seaman (14); and stepbrother, Leland Deschene (9). A funeral service was held on June 20, 1923, at 10:30 a.m. at St. Mark’s Evangelical Protestant church at Clark and Freeman. He was buried near his father in Section 35 of Evergreen Cemetery in Southgate, Kentucky on June 20, 1923.

The driver of the hit skip automobile was not immediately apprehended. The Cincinnati Enquirer reported on June 18, 1923, that the striking vehicle had not been found and that it was hoped that a renewed search would be conducted after Assistant Marshal Seaman’s death. We have no record indicating that the driver or vehicle were located.

Henrietta Seaman Deschene died in 1943 and was buried with Deputy Marshal Seaman and her first husband.