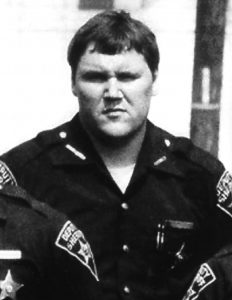 Phil was born on October 3, 1957 to Ohmer Brooks and Evelyn Marie (Grueninger) Pence, Jr.  Phil was a late-life baby for Ohmer and Evelyn and Ohmer passed away two months before Phil’s tenth birthday.  Phil attended Bethel Tate High School and graduated in 1979.

Phil joined the Hamilton County Sheriff’s Department as a Corrections Officer on August 15, 1981.  His goal was to move into Administration.  During 1983, Deputy Pence received a bachelor’s degree in Criminal Justice from the University of Cincinnati.  He was known for his intelligence and ability to lift the spirits of his co-workers during hard times and was single-mindedly focused on his career.

He was also known for his mischief and practical jokes.  Including imitations that caused all, including the inmates, to burst out in laughter.  By June 1984, he had served 2¾ years.

He was also dedicated to his mother, Evelyn.

William G. Zuern, Jr. was born in 1959 to Mr. and Mrs. William G. Zuern, Sr.  They divorced when he was fourteen.  During 1979, William Sr., was convicted of drug trafficking with the assistance of a police informant, Gregory Earls (then 19).  He served five years’ probation and was fined $300 for the offense.  On May 12, 1984 at 12:45 a.m., William Jr. shot and killed Earls, ostensibly for his involvement in his father’s arrest.  Zuern was arrested, arraigned, and sent to the maximum-security section of Community Correctional Institute (CCI – formerly the Cincinnati Workhouse) to await trial.

The Workhouse at 3208 Colerain Avenue was built in 1869 and did not have plumbing for the cells.  Each prisoner was issued an overnight pail in lieu of a toilet.  Zuern took the handle from a pail and, scraping it against the concrete, fashioned it into a spike.

On June 9, 1984, about 1:45 p.m., a prisoner, Loyal Hearst, reported to a corrections officer, Deputy Kenneth Schweinfuss, that Zuern had a homemade knife and had threatened to kill him.  That night, just after the 10 p.m. lockdown, Deputies Pence and Joe Burton conducted a search of Zuern’s cell.  Zuern was naked on the bed inside the cell.  They opened the cell door and he, without warning, lunged out and plunged the sharpened pail handle into Deputy Pence’s chest and pulled it back out.

Deputy Pence staggered back, and Deputy Burton slammed shut the cell door with Zuern inside.  At first, neither officer knew that Officer Pence had been stabbed; but when he lifted his shirt, he saw the wound, sat down at a nearby picnic table, and lost consciousness.  Deputy James Horton called for a life squad at 10:26 p.m.  They arrived at 10:35 p.m. and at 10:37 p.m. transported Deputy Pence to University Hospital.  He was rushed to University Hospital with three holes in his heart.  He told paramedics, “Tell my mom I’ll be okay.”  Sheriff Lincoln Stokes arrived at the hospital about 11 p.m.  Mrs. Pence arrived soon thereafter.

Deputy Pence died on the operating table at 12:26 a.m. on June 10, 1984.  He was only the second Hamilton County Sheriff’s corrections employee to be murdered in the line of duty, the other being Matron Anna Hart in 1916; and both were killed in the old Cincinnati Workhouse facility.

Deputy Pence was survived by his mother, Evelyn Pence, and a half-sister, Sherry Behler.  Deputy Pence’s funeral was conducted at Guardian Angels Church On June 15, 1984.  He was then escorted by more than five hundred law enforcement officers of multiple jurisdictions, in a cortege that stretched out for more than a mile, to St. Joseph New Cemetery.

Zuern’s trial began in September 1984.  Hamilton County Prosecutor Arthur Ney prosecuted the case.  On September 25th, two CCI inmates testified that they had seen the crude weapon and/or that he talked to them about it.  After four hours of deliberation, Zuern was found guilty of both murders.  For the Earls murder, he was sentenced to life imprisonment.  For the murder of Deputy Pence, on October 1, 1984 the jury recommended death.  On October 5, 1984, the judge signed a death warrant ordering his execution within thirty days.  His date of execution was delayed until February 5, 1985; and delayed again….  and again…

By fall 1985, Zuern had earned a cell assignment in the Lucasville prison’s toughest cellblock due to flagrant violations of the prison rules.  On October 14, 1985, Zuern and four other prisoners, overpowered two guards, taking them hostage.  Four of the prisoners were indicted on December 31, 1985.  Incredibly, the Scioto Count Prosecutor allowed a plea bargain of a reduced charge and a gourmet meal served to the hostage-takers, stating that he was concerned about appeals.

During June 1986, the Court of Appeals for the First Appellate for the First District of Ohio upheld his convictions.  During January 1988, the United States Supreme Court refused to hear another appeal asserting that he did get a fair trial.

During December 1991, his conviction was again upheld, this time by the First District Court of Appeals.  By 1992, 32 prisoners from the Greater Cincinnati area were awaiting execution for crimes dating back as many as nine years.

Justice was about to finally be meted out when, on the date of his next scheduled execution, October 5, 1992, a Dayton, Ohio U.S. District Judge Walter Rice postponed it again, unethically and indefinitely.  By September 1993, 33 prisoners from Hamilton County alone were on death row and seven more had died there before execution.

By 1993, Zuern had also refused all communications from his father.

On April 10, 1999, Deputy Pence’s mother, Evelyn, who by then had survived the deaths of her husband and both sons, died without ever seeing justice for youngest son’s murder.

During 2001, Governor Robert Taft eliminated the electric chair as a form of execution and switched to lethal injections.

On July 17, 2003, the U.S. 6th Circuit Court of Appeals in Cincinnati finally rejected a March 2000 ruling by Judge Rice that would have caused a new trial.

By the end of May 2004, the United States Supreme Court had set another execution date of June 8, 2004.  The Ohio Parole Board held yet another meeting on May 25, 2004 to determine whether they would recommend to Governor Robert Taft to grant clemency.  On Monday, June 7, a federal appeals court rejected two more appeals by Zuern, and a three-judge panel lifted the stay of execution.  Governor Taft denied clemency.

During those twenty years, no one from his family had even come to visit until the morning of his execution when his two sisters tried.  He refused them.  And he refused a spiritual advisor, the first since Ohio had resumed executions in 1999.  He also had a Bible removed from his cell.

One day shy of the twentieth anniversary of plunging the spike into Deputy Pence’s heart, on the morning of June 8, 2004, Zuern was led from his cell with toilet paper stuffed in his ears so as not to hear the prison staff at the Southern Ohio Correctional Facility in Lucasville.  When asked if he had any last words, he said, “Nope.”  After a lethal injection was administered, he was pronounced dead at 10:04 a.m.

If you know of information, archives, artifacts, or images regarding this officer or incident, please contact the Greater Cincinnati Police Museum at Memorial@Police-Museum.org.