Craig Scott was born August 12, 1856 in Kentucky to Henderson and Marietta Scott.  By 1870, the family, including two sisters, Emma and Nettie, were living in the 22nd Ward of Cincinnati and Henderson worked as a laborer.  At 14, while attending school, Craig worked as a domestic servant in the Eland Niles home.  While celebrating Independence Day in 1871, the rambunctious fifteen-year-old shot himself in the hand with a percussion pistol.  By 1878, Craig was working as a laborer and living with his family on Sycamore Street.  We believe Nettie died before 1880, but there were two more sisters, Pearl and Minnie, by then and they were living at 532 Sycamore Street.

By then, Craig had married Rosa Holloway and they also lived on Sycamore, and with a child born in 1879, Maryette “Etta” Scott. Between 1881 and 1883, Craig moved to Beech and Chestnut Streets, and he worked as a driver.  He moved to Lincoln Avenue in 1884 and worked as a laborer.

After decades of City Hall corruption, the State of Ohio, on March 31, 1886, disbanded the entire Cincinnati Police Department which had operated under a strong-Mayor, and partisan government.  A non-partisan Board of Police Commissioners was appointed and began rebuilding a non-partisan police department.

Craig applied and was one of the first to successfully pass all the first-in-the-nation examinations.  On September 21, 1886 he and two others appeared before the Commission and was told to return for final examination at their next meeting.  On September 24, 1886, he and one other were accepted.  He was appointed Patrolman on October 6, 1886.

During 1887, he lived at 191 Linn Street.  On June 8, 1888, Patrolman Scott divorced his wife alleging adultery.  He moved back to Lincoln Avenue with his father and apparently with his daughter.

Within 1½ years of employment, Patrolman Scott was considered by The Enquirer, to be “one of the finest of Cincinnati’s police officers.”

During January 1893, Patrolman Scott was assigned to the Bremen Street (3rd District) Station.

James H. Garver was born during March 1860 in Hamilton, the youngest of six born to John H. and Hannah Jane (Brooks) Garver.  His father was a respected and well-connected tinner.

Garver was well-known among horseman, having been a trainer for the Bowerman Brothers in Lexington, Kentucky.  He lost that position and later joined the Hamilton Police Department as a Substitute Patrolman about April 1892.  Within months, on December 4, 1892, he was sued for allegedly falsely arresting a man and assaulting him and afterwards dropping the charges.  In the earliest days of 1893, Garver was involved in a “drunken bar fight” in Hamilton and not disciplined.  He “laid off” the night of January 5, 1893 to travel to Cincinnati, supposedly to get his brother out of jail.

About 5 p.m. on Thursday, January 5, 1893, Garver and another man (possibly his brother) made a call on a woman known to them as Kittie Moore at 87 Longworth Street (just west of Elm Street); a house of ill-repute.  Mrs. Charles Hawkins, the house owner’s wife, advised the men that Miss Moore was not there.  The men threatened to shoot everybody in the house.  She sought the assistance of Patrolman Fisher who responded, but the men left before he arrived, and a search failed to find them.

After Officer Fisher was gone, the men came back.  Garver was “very drunk” and pulled out a .41 caliber Colt revolver.  He said he was going to have a good time.  Mrs. Hawkins ran into the street screaming “Murder!” and found Patrolman Scott.  Patrolman Scott was walking from his home to work at the Bremen Street Station.

Patrol 1 responded to take Garver into custody.  Patrolman Scott insisted on going with the patrol wagon and filling out the paperwork at Central Police Station for Shooting to Kill.  “Though he had ‘an ugly bullet wound,’ he never whimpered.”

Patrolman Scott was then taken to City Hospital, where he was treated by Dr. Bauer, the receiving surgeon, and Dr. Armstrong, the Police Surgeon.  Neither could find the ball in his flesh, and his thigh wound was dressed.  He was sent home and expected to recover.

When Garver sobered up, he admitted shooting Patrolman Scott and blamed it on being drunk.  He said, “I know I was to blame and only thank God that I didn’t hurt the man more than I did and that he didn’t kill me.”

On January 7, 1893, after his appearance in Police Court, Garver was released on bond.

A Hamilton citizen later opined in a letter to the editor that if he had been disciplined for his drunken bar fight, he would not have had in his possession on January 5th a Hamilton Police Department-issued firearm while searching for a prostitute in Cincinnati. 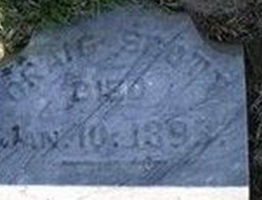 Five days later, about 10 a.m. on January 10, 1893, word arrived at police headquarters that Patrolman Scott had taken a turn for the worse and was gravely ill.  Chief Deitsch, Prosecutor Hertenstein, and Dr. Armstrong responded at once to get a deathbed statement, but when they arrived Patrolman Scott was already dead.

Patrolman Scott left a wife of three years, Sallie Scott; daughter, “Etta” Scott; both parents; and siblings.  On January 13, 1893, services were held at the Allen Temple.  Superintendent Philip Deitsch ordered that the 4th Company, along with its commissioned and noncommissioned officers and the color guard, to attend the funeral and that command officers to wear their winter uniforms and white gloves.  Pall bearers included Patrolmen John Samples, White, Harry Spurlock and Byron Deigh.  Patrolman Scott was buried in the Colored American Cemetery (now United American Cemetery) on Duck Creek Road.

Immediately upon Patrolman Scott’s death, Chief Deitsch had a warrant issued charging Garver with Murder and had a wire sent to Hamilton Chief Thomas to that effect.  Cincinnati Detective Herman J. Witte set out by train to pick up Garver.  Chief Thomas went to Garver’s home on North B Street, arrested him, and transported him to Hamilton Police headquarters.  Detective Witte arrived at 1:40 p.m. and took Garver back with him on the 2:50 train.

On Wednesday, January 11, 1893, Garver appeared in court, but did not enter a plea because his attorney, H. L. Morey of Hamilton, was not there.  The case was continued until January 20, 1893.

On January 13, 1893, the Coroner, Dr. Walker, reported that the wound was a terrible one owing to the caliber of the bullet and that it was found in an outer muscle.  A piece of Patrolman Scott’s pants was found in the leg wound which caused the blood poisoning that resulted in his death.

A coroner’s inquest began on January 15, 1893 and continued until the next week.  On the same date, the Coroner related to the press that he was having a challenging time ascertaining the circumstances on the night of the shooting.  By then, Garver was claiming self-defense.

On July 13, 1893, the indictment was nulled due to a lack of evidence.  There were no witnesses to the quarrel, no deathbed statement, and only Garver’s initial confession and later tale of self-defense.

Etta Scott, by 1898, was living on Lincoln, probably with her grandparents.  On January 31, she married William H. Mason.  We believe she had at least two children, Earl C. Mason and Henry A. Mason.  Etta Mason died in 1956 and is buried in the United American Cemetery with her husband and father.

It appears Patrolman Scott has one surviving descendant, a great-granddaughter, Margie Mason.

James Garver left or was removed from the Hamilton Police Department and given a position with the Hamilton Fire Department.  During 1895, he married.  His wife died during 1912.  During 1918, he became a courthouse janitor, from which he was fired on June 11, 1925 for no specified reason.  Garver died on June 16, 1942 at the age of 82.