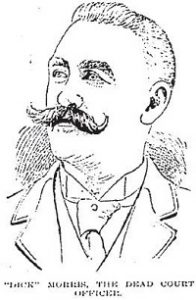 Dick was born August 3, 1856 in Four Mile, Campbell County, Kentucky to Richard and Marry (Dollard) Morris.  He had at least six younger siblings and probably more.

By 1880, and maybe for a few years, he was working as a Park Patrolman for the Cincinnati Park Commission.

Patrolman Morris joined the Cincinnati Police Department in 1881.  He ran the riverfront beat with Detective Billy Bulmer when it was one of the toughest places in the city.  Patrolman Morris was noted and highly respected for his bravery.  He was one of the most efficient and popular officers of the day with many thrilling experiences and narrow escapes from death.

During the reorganization of 1886, the newly established medical team found him slightly visually impaired and below the new standards recently established by the Public Safety Commission for the job of Patrolman.  However, based on his history and reputation, he was offered a position as a Court Officer.

He went to great lengths, sometimes not eating or sleeping, to serve his warrants.  By 1895 he was living at 599 McMillan Street,

Louis Stolzenberger was born about 1868 and during June 1891 he married 19-year-old Lizzie Fulcher Cook.  They lived in a tenement house at 492 Central Avenue near 14th Street.  The two had a child together, but the child became sick and died.

Then, Lizzie became unfaithful to Stolzenberger with George Heintz.  Stolzenberger found out about it and fixated on Lizzie, Lizzie’s sister, Minnie Cook Heintz, and a couple of his neighbors.  According to his brother, Stolzenberger was going crazy with the issue.

On February 27, 1895, Lizzie went to police headquarters to report an assault by her husband that morning.  She alleged that before leaving that morning, he threatened to come back and do harm to her and her sister.  The judge issued a warrant which was assigned to Court Officer Morris.

Officer Morris went to the Stolzenberger home and, upon finding that Stolzenberger was not there, he stood across the street from the residence and waited.

About 3:55 p.m., on his way down Central Avenue, Stolzenberger spotted his sister-in-law, Minnie Cook, at Charles Street.  She saw him and began to run.  He took two shots at her and missed both times.

Patrolman Fred Shafer, and eight-year veteran out of the First District – and excellent shot with a revolver – was very sick that day, almost feinting at his home.  But he went to work regardless.  As he was walking his beat on the east side of Central Avenue at Elizabeth Street, he heard and saw Stolzenberger shooting at his Miss Cook.  Shafer chased him up Elizabeth and to 21 Elizabeth; the residence of George Heintz’s employer.

Patrolman Shafer ran to and jumped on Stolzenberger and wrestled away his revolver.  A patrol wagon arrived almost immediately having already been called for by a citizen, but Stolzenberger was dead.

It was then that Patrolman Shafer learned that Stolzenberger had shot another officer.

When Stolzenberger’s pockets were inventoried, officers found a new box that his revolver had come in; apparently purchased within the last 24 hours.  Also in his pocket were notes written to various people that made it clear that he intended to kill everyone involved in Lizzie’s affair or die trying.

Dr. Castle and Police Surgeon French consulted and determined to observe Officer Morris.  They treated him for shock, and he appeared to be getting better.  By 1 a.m. on February 28, 1895, Officer Morris was doing well and resting comfortably.

Judge Gregg adjourned Police Court that morning as all in City Hall were concerned for Officer Morris.  Telephone calls came into Central Station all day inquiring as to his condition.

At 2 p.m., a call came from City Hospital informing the Department that Officer Morris, surrounded by friends, family, and priests from both Assumption and St. Xavier parishes, had died.

Court Officer Morris left a wife of eleven years, Margaret.  His funeral was held from his home and a Requiem Mass was celebrated at the Church of Assumption in Walnut Hills at 9 a.m. on March 2, 1895.  From there, he was buried in Section E, Lot 56 of Calvary Cemetery in Evanston.  Pallbearers included Court Officers John Whittaker, Dennis Creed, John Thomas, Henry Kruse, Martin Brennan, James McCarthy, John Walters, and John Pfeifer.

Citizens of Cincinnati began a campaign to assist Mrs. Morris with the mortgage to her home, but by 1896 she was living elsewhere and working as a dressmaker.  She died 22 years after her husband during 1918 and was buried next to him.

If you know of any information, artifact, archive, or image regarding this officer or incident, please contact the Greater Cincinnati Police Museum at Memorial@Police-Museum.org.