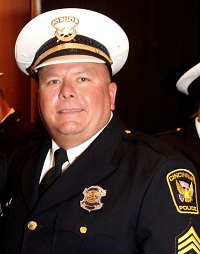 Hank was born May 8, 1967, in Ohio to William Bernard and Agnes Pauline (Jones) Ward. He attended Norwood High School, graduating in 1985.  He attended the University of Cincinnati from 1985 to 1988 majoring in Pre-Med and Biology and one semester at Edgecliff College for Mortuary Science.

While attending college, he worked various jobs, including line worker at General Motors in Norwood and for the Norfolk Southern Railway.

Also in 2015, he transferred back to District 1 and soon thereafter took charge of the District 1 Neighborhood Liaison Unit, where he received glowing reviews from the District Commander.  During 2020 he transferred to Planning Section, Crime Analysis and Problem-Solving Unit.  Sergeant Ward retired October 18, 2021, with 32 years of service and 25 letters of appreciation and/or commendation including eight from police chiefs.

After a few years with heart problems and less than four months after retiring, Sergeant Ward died on January 25, 2022 at the age of 54.