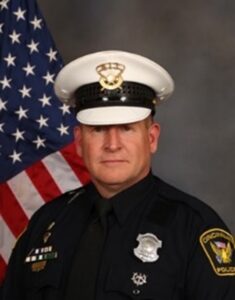 During July 2001, while a member of a Violent Crimes Task Force, his bravery was celebrated by Police Chief Thomas Streicher after one of the longest lasting shootouts in Department history; then again by Mayor Charlie Luken after another running shootout later that month.  Three months later Officer Haas was tapped to train new officers at the Cincinnati Police Academy.  His valor was honored in January 2002 by the Hamilton County Police Association and in May 2002 at the Community’s Annual Police Appreciation Dinner.

On June 8, 2003, Officer Haas transferred to District 5 (1012 Ludlow Avenue).  Six years later, he was assigned to the District 1 (310 Ezzard Charles Drive) Motorcycle Unit and six years later to Special Services Section, Traffic Unit.  Officer Haas also served on the Cincinnati Police and Hamilton County Police Association Honor Guards for 21 years and on the Executive Board of the Police Fraternal Order of Police Lodge 69.

Officer Haas was medically retired on October 13, 2021, with 29 years of service and 41 letters of appreciation and/or commendation, including five from two police chiefs, two judges, a city manager, a state senator, and the City Personnel Director.

During 2020, Officer Haas was diagnosed with brain cancer.  He endured surgery, radiation therapy, and chemotherapy.  He died, surrounded by family, at 11 a.m. on January 17, 2022 at the age of 53.

Visitation will be held 4 to 8 p.m. on Friday, January 21, 2022 at Arlington Memorial Gardens Funeral Home at 2155 Compton Road.  Follow the thin blue line along the drive to the funeral home.  An FOP Service will be held at 7:30 p.m.  Services will be held at 10 a.m. on Saturday, January 22, 2022 at the Church of the Assumption at 7711 Joseph Street.  Parking is limited.  Do not arrive prior to 9 a.m.  A graveside service and burial will occur immediately following at Arlington Memorial Gardens.