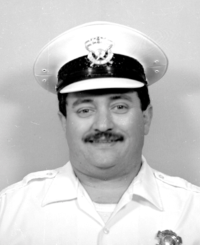 Gary was born June 24, 1952, to Victor H. and Hester Alice (Saylor) Westerbeck. He attended Roger Bacon High School and graduated in 1971. He also attended the University of Cincinnati and majored in Police Science and took Criminal Law at Rollins College of West Park, Florida.

After high school Gary worked at McDonalds as an Assistant Manager and at Nutone as a truck loader.

He joined the United States Air Force on March 17, 1975 and served at Patrick Air Force Base. Senior Airman (E-4) Westerbeck was honorably discharged March 17, 1979, with a Good Conduct Medal.

Two months later, he joined the Cincinnati Corrections Institute as a Corrections Officer.

On March 2, 1980, Gary was appointed as a Police Recruit in the Cincinnati Police Division. He was promoted to Police Officer on September 14, 1980, issued Badge 783, and assigned to District 4 (4150 Reading Road). Officer Westerbeck was rotated to District 5 (1012 Ludlow Avenue) a year later. He also served in Communications Section. He then returned to District 5, in the Investigative Unit, where he specialized in auto theft investigations and maintained the liquor permit files. Officer Westerbeck left city service on March 29, 1996, with 21 years of service to his country and community and 34 letters of appreciation and/or commendation: including six from the Police Chief’s office and one each from the Director of Safety and Hamilton County Sheriff.

He then joined the Security Department at Good Samaritan Hospital at Clifton and Dixmyth and became the First Shift Supervisor. After another 22 years of service, he then provided security to a nursing home.

Officer Westerbeck suffered from asthma and recently suffered an asthma attack, then a heart attack. He was taken to Mercy West Hospital and put on life support. When all medical resolutions were exhausted, he was taken off life support and died at 2:15 p.m. on April 27, 2022. He was almost 70. Continuing to serve, as an organ donor, he improved the lives of more than one hundred people.

He was predeceased by his parents and both siblings, Brenda Sue Fehr and Robert Westerbeck. Officer Westerbeck is survived by his wife of 49 years, Laura (Diciero) Westerbeck; children, Gary Westerbeck, Jr., and Chris Westerbeck; six grandchildren; and one great-granddaughter.