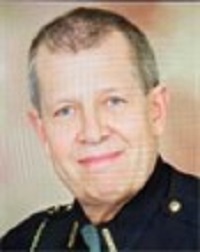 Mike was born May 31, 1956 in Hamilton to WWII Veteran and Butler County Special Deputy Raymond Brockman and Daughter of the American Revolution Norma (Loheide) Brockman.  He graduated from Hamilton Taft High School in 1974 and from Miami University in 1976.

Mike worked for Champion International Security in his early years.

He joined the Butler County Sheriff’s Office as a Special Deputy on January 10, 1978.

He was appointed a Police Officer in the St. Clair Township Police Department during September 1982 and was later promoted to Sergeant.  During June 1992, the department was disbanded.

Sergeant Brockman rejoined the Butler County Sheriff’s Office as a Special Deputy on July 1, 1992.  During 1997, he graduated from OPOTA as a Police Academy Instructor specializing in Police emergency and pursuit driving.  On October 23, 1998, he was appointed Deputy Sheriff.  He was promoted to Corporal on September 4, 2013.  Corporal Brockman retired on January 5, 2018.

He was then reappointed Special Deputy. During 2007, Corporal Brockman earned an Instructor Award from Sheriff Richard Jones.  At the time of his death he had served his country and county well over 40 years.

Corporal Brockman also taught at the Butler Tech Police Academy and was a Professional Association of Diving Instructors S.C.U.B.A. Divemaster.

He was also a member of Hugh L. Bates, # 686 F & A.M., Syrian Temple Shrine, Fraternal Order of Police Lodge #101, and U.S.S. Hornet Association.  He was also appointed to the Honorable Order of Kentucky Colonels.

Corporal Brockman died on February 1, 2022 at the age of 65.  His wife, family, and close friends were by his side.

He is survived his wife of 21 years, Peggy (Holland) Brockman.

Visitation will be held 4 to 7 p.m. on Tuesday, February 8, 2022, at the Avance Funeral Home & Crematory at 4976 Winton Road in Fairfield.  Funeral Services will be held at 10 a.m. on Wednesday, February 9, 2022, with Chaplain Frank Smith officiating. Burial will follow at Rose Hill Burial Park.