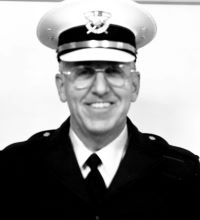 Carl was born “Karl Wolfram” on March 27, 1928, in Cincinnati, the fifth of seven children born to Romanian immigrants Peter and Katherina (Gimble) Wolfram. He grew up in Westwood and attended Elder High School.

Carl joined the United States Army on November 3, 1950. He served for four months in Company C, 501st Airborne Medical Battalion, 101st Airborne Division and transferred to Company K, 19th Infantry Regiment, 24th Infantry Division to fight in Korea. The 24th Division participated in Operation Rugged and Operation Dauntless in April, pushing the enemy north of the 38th Parallel. Then a counterattack threatened to encircle them, but with two more Army and Marine divisions, they were thrown back. The 24th Division withdrew, and United Nations forces took over. They lost all the territory gained by the 24th. Another counteroffensive, with the 24th at its center, pushed North Korea back beyond the 38th Parallel again. Over the next few months, American and enemy forced fought back and forth, repeatedly over the same ground, and by January 1952, the 24th Infantry Division had sustained over 10,000 casualties in eighteen months of fighting. During the last twelve of the eighteen, Carl was promoted repeatedly from Private to Corporal, Sergeant, Staff Sergeant, Sergeant First Class, and Master Sergeant. He returned to the States to train troops in the 7th Armored Division at Camp Roberts, California. Master Sergeant Wolfram was honorably discharged on August 4, 1952, with a Korean Service Medal with 4 bronze stars (for the four major campaigns), Distinguished Unit Emblem, United Nations Service Medal, and a Combat Infantry Badge.

He then went back to driving a truck in 1953, this time for Foster Freight Lines, Inc. and Interstate Dispatch, Inc., and continued to do so until 1955.

On March 7, 1955, Carl joined the Cincinnati Police Division in Police Recruit Class # 28. He was promoted to Patrolman on June 13, 1955, issued Badge 573, and assigned to the then new District 1 (310 Lincoln Park Drive). On January 29, 1956, he was rotated to District 3 (3201 Warsaw Avenue). Already by October 6, 1956, he began a long string of mentions in the news when he found and chased down a man wanted for theft and assault at a laundromat. Then at the end of that month, he partnered with Patrolman Ralph Gramke to stake out a business in his personal car and caught the anticipated burglars attempting to pull off a $2000 (almost $21,000 today) heist. The two paired up again to capture another burglar in April 1957 who had taken $5400 (over $56,000 today) in loot.

On May 19, 1957, Patrolman Wolfram transferred to District 5 (1024 York Street, then 1012 Ludlow Avenue) and continued to excel in policing.  During one 12-month period starting in 1960, he earned eight letters of appreciation and/or commendation and during February 1961 he was named Police Officer of the Week. By 1961, the District 5 Commander assigned him to work as a plain clothes investigator. In that capacity, having interviewed about 500 witnesses, he arrested a man in connection with five assaults on women in the Clifton area.  In December 1966 he caught two escapees from the Workhouse. The Citizens’ Crusade honored Patrolman Wolfram during National Police Week 1970 as one of the Outstanding Patrolmen of the Year for his imaginative work in closing sixteen burglary cases.

He was promoted to Specialist on January 10, 1971 and issued Badge PS-18. A month later, the Division established a Burglary Squad in Criminal Investigation Section comprised of two sergeants and five detectives, and Specialist Wolfram. Almost six years later, on December 5, 1976, he transferred back to District 5.

On July 18, 1978, he was assigned to headquarters in the Operations Bureau where he spent his last eight years. His supervisors determined him to be outstanding and able to handle any task assigned.  Assistant Chief Edward P. “Ace” Ammann considered him to be loyal, dependable and a source for how things were perceived in the districts. “He had a real feel for the guy on the street,” he said.

Specialist Wolfram retired July 2, 1986, with 33 years of service to his country and community and 30 letters of appreciation and/or commendation, including eight from several police chiefs.

Specialist Wolfram suffered several maladies in his later years and was finally diagnosed with cancer about 2020. He died on April 9, 2022. At 94 years of age, he was the last surviving member of Recruit Class # 28, and the second oldest retired Police Specialist.

Memorials may be made to the Cincinnati Fraternal Order of Police, 1900 Central Parkway, Cincinnati, OH.