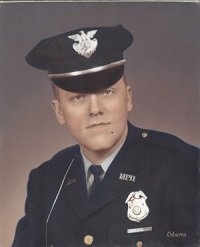 Robert was born September 16, 1941 in Middletown to Merle and Margie (Purvis) Cox.

After high school, at the age of 17, and just before our involvement in Vietnam, Robert enlisted into the military.  He served in both the United States Army and Navy and was honorably discharged from each.

He then joined the Middletown Police Department as a Patrolman.  He was later promoted to Sergeant and served as such until he retired.

Visitation will be held 12 to 1 p.m. on Saturday, March 13, 2021, at Breitenbach Anderson Funeral Home at 517 South Sutphin Street in Middletown.  A memorial service will follow with Pastor Kim Arnold officiating. The Middletown Police Honor Guard and the Veterans of Foreign Wars Honor Guard will be present. His remains will be committed at sea by the United States Navy.