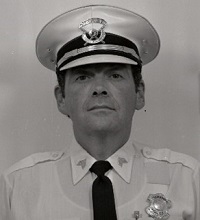 Jim was born October 17, 1947 in Ashtabula, Ohio to Maurice James, Sr. and Kathleen Anne (Neely) Howe.  He attended Saint John High School in Ashtabula and graduated in 1965.  He then moved to Cincinnati and attended the Saint Gregory Seminary, majoring in Philosophy, until 1968.

While attending high school, he worked as a salesclerk at Jules D. Bognar in Ashtabula.  From June to September 1968 he worked as a postal clerk for the United States Postal Service.

Sergeant Howe then worked for AirNet Systems, based in Columbus, traveling the country for many years teaching secure transportation of hazardous materials and defensive driving techniques.

Memorials may be made to the Greater Cincinnati Police Museum, 308 Reading Road, Suite 201, Cincinnati, OH  45202.