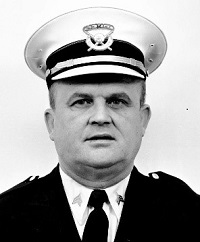 Louie was born November 4, 1939 to Louis John, a mechanic, and Mary Alice (Lahey) Niehaus.  He attended Elder High School and was a member of the 1958 Ohio State championship baseball team.  He graduated in 1958.  He also graduated from the University of Cincinnati.

On September 28, 1958, Louie joined the United States Army and served as a rifleman in the 7th Cavalry Regiment, Infantry Division.  For seven months he was assigned to Iceland.  He was honorably discharged September 21, 1968 with a good conduct medal and remained in the Army Reserves and the 719th Transportation Battalion for eight more years.

From January to May 1961 he worked at his father’s Niehaus Service Station, at Glenway and McKeone Avenues.

Louie joined the Cincinnati Police Division on May 22, 1961 as a member of the 39th Police Recruit Class.  On August 28, 1961 he was promoted to Patrolman, issued Badge 729, and assigned to District 3 (3201 Warsaw Avenue).  He was rotated to District 1 (310 Ezzard Charles Drive) on January 1, 1963.  Patrolman Niehaus returned to District 3 in 1965.  On March 16, 1968 he received an award at the annual Police Appreciation Dinner for an investigation he conducted of two robberies.  On January 17, 1971, he was promoted to Sergeant and issued Badge S-83.  During October 1971 he transferred to District 5 (1012 Ludlow Avenue).  A year later he was rotated back to District 1 for the next 21 years and where he became an iconic district administrative assistant.  Sergeant Niehaus retired on March 13, 1993 with almost 32 years of service and eight letters of appreciation and/or commendation, including three from police chiefs.

Sergeant Niehaus contracted COVID and died on February 6, 2021 at the age of 81.

A Mass of Christian Burial will be celebrated at St. Bernard of Clairvaux Church at a later date.