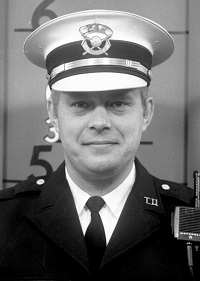 Roger was born January 23, 1937 in Cincinnati to Carl and Marie Meyer of Green Township.  He attended St. Aloysius Elementary School and Elder High School, graduating in 1956.

While attending high school, he worked as a clerk at Alber’s Supermarket on Glenway Avenue.  Upon graduation, worked as a troubleshooter at Baldwin Company on Gilbert Avenue.

He also enlisted in the Coast Guard Reserve and was honorably discharged in 1959.

Roger joined the Cincinnati Police Department as a Police Recruit on October 12, 1959 in the 37th Recruit Class.  He was promoted to Patrolman on February 3, 1960, issued Badge 323, and assigned to District 3 (3201 Warsaw Avenue).  During January 1961 he was rotated to District 1 (310 Lincoln Park Drive).  A dedicated officer, though feeling ill during a June 1965 investigation, he continued interrogating a burglary suspect until he admitted to 30 offenses.  Only then did Patrolman Meyer concede to go the hospital with pneumonia.  Interestingly, one month prior, his captain questioned the very high performance rating his lieutenant had issued him.  During 1982, Patrolman Meyer returned to District 3 on January 7, 1968.

We believe he is survived by his wife of 63 years, Joyce Marian (Thuerner), four children, and grandchildren.

Visitation will be held time 10 a.m. to 12 p.m. on Tuesday, August 24, 2021 at St. John the Baptist Catholic Church at 10010 Carolina Trace Road in Harrison.  An FOP service will be held at 11:45 a.m.  A Mass of Christian Burial will follow at Noon.  Interment to follow at St. Bernard of Clairvaux Church Cemetery at 7130 Harrison Avenue in Taylor’s Creek.

Memorials may be made to St. Jude Children’s Research Hospital.