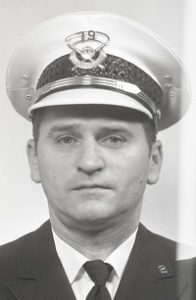 He worked as a machine operator at Goldsmith’s at Findlay and John Streets during 1945 and then at Clopay Corporation until 1951.

Gene joined the Cincinnati Police Division on April 15, 1951 as a Police Recruit.  On July 15, 1951.  He was promoted to Patrolman, issued Badge 449, and assigned to District 4 (754 West Fifth Street).  Patrolman Grady transferred to the Highway Safety Bureau (City Hall) on January 1, 1953.  He also served in District 3 (3201 Warsaw Avenue), District 1 (310 Lincoln Park Drive), and District 2 (314 Broadway).  On July 1, 1960, the Civil Service Commission announced that he finished first on the Patrolman 2 examination and he was promoted and assigned to the Juvenile Bureau.  A year later, he transferred to District 2.  On February 27, 1966 he was promoted to Police Specialist and issued Badge PS-79.  Specialist Grady transferred to the Criminal Investigation Section on February 7, 1971.  He transferred to the District 1 Investigative Unit in 1973.  For most of his career, he was considered a top-notch investigator wherever he was assigned.  Specialist Grady retired on July 3, 1984 with 33 years of service and 22 letters of appreciation and/or commendation including four from police chiefs.

Specialist Grady then went to work as a security officer at the Cincinnati Academy of Physical Education (CAPE).  He transferred to Walnut Hills High School as Lead Security Officer and important part of the Walnut community.  He retired again in 2013, at age 85, having served his community and Cincinnati schools for 62 years.

He also served many years as president of the Lower Price Hill Community Council.

Specialist Grady died on January 17, 2021 at the age of 93.  He was last officer to have held the rank of Patrolman 2, the last living member of Recruit Class 21, and the second oldest living former Police Specialist.