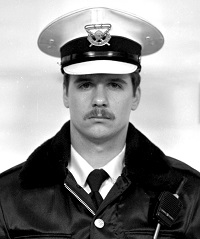 Dave was born August 20, 1954 in Cincinnati to David M., Sr., and Mary Kathryn (Stubbers) Kelly.  When he was three, his father attended the Cincinnati Police Division’s 32nd Recruit Class and appointed a Saint Bernard Patrolman.  The junior Dave attended Roger Bacon High School graduating in 1972.  He attended the University of Cincinnati, majoring in Police Science, and earned an Associate Degree in 1976.

Dave joined the Cincinnati Police Division as a Police Cadet on August 19, 1973.  His first day in the Police Academy was his 19th Birthday.  Cadet Kelly, on alternating quarters, attended college and worked at Police Communications Section (310 Lincoln Park Drive) and Property Management Section (314 Broadway).  He was promoted to Police Officer on October 3, 1976.  Officer Kelly, and the rest of Class 63, due to financial issues at City Hall, were laid off the next day.

A year later, during October 1977, he was appointed a Police Officer for the Colerain Township Police Department.

On April 1, 1979, he was recalled to Cincinnati, issued Badge 11, and assigned to District 3 (3201 Warsaw Avenue).  Officer Kelly transferred to District 4 (4150 Reading Road) during October 1980.  He was promoted to Police Specialist on January 28, 1990, issued Badge PS-229, and ten months later assigned to Vice Control Section.  Six years later he transferred to the Asset Forfeiture Squad.  There he was described by his supervisor as a “dedicated employee who continues to perform at the highest level of competence year after year.”  Specialist Kelly retired on April 8, 2006 with 33 of service and 20 letters of appreciation and/or commendation, including five from Cincinnati Police Chiefs.

About 2018, Specialist Kelly contracted Pancreatic Cancer.  He quietly fought the nearly always fatal disease valiantly for three years.  By the end of June 2021 his medical team recommended he go into hospice care.  He died calmly and without pain at midnight on November 24, 2021 at the age of 67.

Memorials may be made to the Greater Cincinnati Police Museum, 308 Reading Road, Suite 201, Cincinnati, OH  45202 or Hospice of Cincinnati.