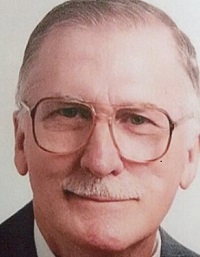 Bill was born on April 2, 1928 in Hamilton, Ohio, to Joseph and Elizabeth (Baber) Smith.

Bill enlisted in the United States Army and served during World War II.  While in Germany, he met Annemarie Speck and married her on December 17, 1948.

When he returned home, he joined the Oxford Police Department as a Police Officer.

After serving his country and community, Officer Smith was appointed Director of Security at Becket Paper.  He served there for many more years.

Visitation will be held 5 to 7 p.m. on Wednesday, November 17, 2021 at Brown Dawson Flick Funeral Home at 1350 Millville Avenue in Hamilton.  Funeral Services will be held at 10 a.m. on Thursday, November 18, 2021 at St. Peter in Chains Catholic Church at 382 Liberty Avenue. Burial will follow at St. Stephens Cemetery.