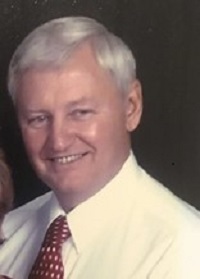 Jerry was born May 26, 1946 to Harry Anderson and Alma Marie (Duffy) Crowder.

After high school, Jerry joined the United States Army during the Vietnam War and served as a Military Police officer.

After returning home, Jerry joined the Erlanger Police Department.  During 1973, Officer Crowder was named Crime Prevention Officer.  By 1975, he was promoted to Sergeant.

After six years with Erlanger, Officer Crowder accepted a position of Patrolman in the Boone County Sherriff’s Department and their Special Weapons and Tactics (SWAT) Team. By December 1986, he was once again involved as a Crime Prevention Officer.  By 1988, he was trained as a Polygraphist.  During 1989 he was additionally working as a DARE Officer.

Officer Crowder was a member of Hebron Lutheran Church and a charter member of the Fraternal Order of Police Boone Lodge 46.

Officer Crowder died on October 27, 2021 at St Elizabeth Medical Center in Edgewood at the age of 75.

A memorial visitation was held 2 to 6 p.m. on Wednesday, November 3, 2021 at Hebron Lutheran Church.  A funeral service will follow.