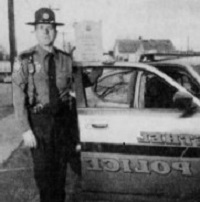 During 1972, John joined the United States Marine Corps.  He served both on active duty and in the United States Marine Corps Reserves.  During which he was assigned to the Marine Helicopter Squadron One (HMX-1), responsible for the transportation of the president and vice president of the United States, heads of state, Department of Defense officials, and other VIPs as directed by the Marine Corps and White House Military Office – often known as “Marine One”.  Specifically, he served on presidential security details for Presidents Nixon and Ford.  Chief Warrant Officer Wallace retired with 25 years of service.

John joined the Sharonville Police Department as a Patrolman in 1983. On February 26, 1990, he was promoted to Sergeant.  Sergeant Wallace retired during August 2000.

He was also a police instructor for the Great Oaks Police Academy and also served in Trenton, Madeira, Union Township (Bulter County), and Loveland.