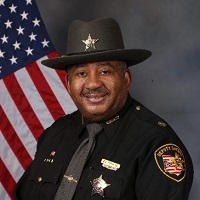 Earl was born December 19, 1956 in Richmond, Virginia, the oldest of four children born to Earl Edward, Sr., and Joyce M. Price.  In 1960 the family moved to Cincinnati where he graduated from Hughes High School.  He was influenced to be afraid of law enforcement growing up as a young child in the inner-city and during the race riots of the 1960s, but he grew to respect law enforcement sufficiently to choose it as his profession.

Earl joined the Hamilton County Sheriff’s Office in 1981 and served as a corrections counselor with the Vocational Education Work Release Program and Drake Hospital’s Driving While Intoxicated Division for adult offenders.  He continuously elevated in rank at various positions including, Training Lieutenant in the Training and Development Division. He provided numerous programs and services that provided large scale security and safety protocols for protection of the citizens of Hamilton County; trained hundreds of officers in various areas including expandable control devices, gun retention, use of force, self-defense, self-respect; implemented the CERT team, served as a negotiator, adjunct instructor, and in recruitment and hiring for law enforcement.  During Black History Month 2008 he was he was honored by the Greater Cincinnati Police Museum for his outstanding 27-year career in law enforcement – and he was not finished. Lieutenant Price retired from the Sheriff’s department in 2011.

He returned to the Hamilton County Sheriff’s Department as Captain of Support Services.  By 2020, he was promoted to Major and put in charge of the Special Services Division, responsible for the Fusion Center, Records Section and Training Section.  During August 2020, he and the Police Museum participated in an important, broadcasted panel discussion at the National Underground Railroad Freedom Center regarding police/minority relations.  He was also working with the Freedom Center to create a training program addressing implicit bias.  By the end of the year, he had researched, planned, and staffed a major ethics-based training program to be implemented during December 2020 in the Hamilton County Sheriff’s Office.

Always involved with his community, he also taught security and self-defense at schools, churches, and corporations.  During the 1990s and beyond, he and then Captain Charmaine McGuffey taught self-defense sessions for the YMCA. .

Major Price retired January 4, 2021 with almost 40 years of service and many letters of appreciation and commendation, including from other cities (including Sharonville), individuals, churches, and organizations (like the Washington DC Metropolitan Police Department) who benefitted from the safety measures and education put in place by him and his team.

Both the Freedom Center and Police Museum were considering him for assistance with future race-relation programs, but on his 47th day of retirement, February 19, 2021, he suffered a fatal heart attack.

Visitation will be held 9 to 11 a.m. on Tuesday, March 2, 2021 at the House of Joy Christian church at 3220 Central Parkway.  A funeral service will be held at 11 a.m.  Graveside services will be held 12:45 to 1:15 p.m. at Spring Grove Cemetery.  The ceremony will be live streamed at  https://www.facebook.com/SheriffHamiltonCountyOH.