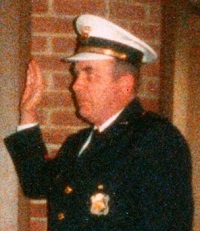 Richard left high school and went to work at Alber’s Supermarket at Melrose and McMillan.  During October 1956 he married Betti Lou Butler.

He went back to high school, probably Hughes Night School, in 1959 and earned a diploma.

In January 1960, Richard joined the Cincinnati Workhouse as a Guard.

The Park Police Department was disbanded, and its officers transferred into the Cincinnati Police Division, on November 13, 1988.  Lieutenant Karpe continued in the Park Police Unit until his retirement on December 17, 1988, with almost 31 years of service to his country and community.