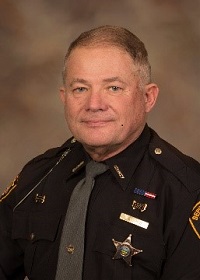 John was born July 27, 1945 in Cincinnati to John J., Sr., and Ruth H. (Tragesser) Reiring.  He attended St. Ignatius Elementary School, and La Salle High School where he participated in track and graduated in 1964.

After high school, he joined the United States Army and served during the Vietnam War, where he came in contact with Agent Orange, which caused residual effects throughout his life.

He then joined the Middletown Police Department as a Patrolman in 1969.  By 1980 he was promoted to Sergeant.  During the 1990s, he was promoted to Lieutenant.  The current Chief, David Birk, remembers him as “a great man and supervisor.  Lieutenant Reiring “retired” in 2002.

He joined the Butler County Sheriff’s Office on June 11, 2013 and worked in their Civil Division.  He is remembered there by his “big smile”.  By 2021, Lieutenant Reiring had served his country, community, region, and county for more than five decades.

Lieutenant Reiring had shoulder surgery and concurrently caught COVID-19.  It was believed that he had beaten the virus, but it came back, and he died on March 12, 2021 at Mercy Hospital of Fairfield at the age 75.

Visitation was held and a Mass of Christian Burial celebrated March 17, 2021 at Sacred Heart Church in Fairfield.  Burial was at Rosehill Burial Park. Memorials are suggested to the Butler County Sheriff’s Office Peace Officers Memorial or La Salle High School.