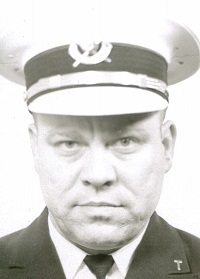 Jim joined the United States Marine Corps during World War II on January 24, 1944.  He served in the Pacific Theatre for 21 months, including the occupation of Japan.  Corporal Combs was honorably discharged March 4, 1946 with an Asiatic-Pacific Campaign Ribbon with two bronze stars (indicating participation in three major campaigns) and a Presidential Unit Citation.

From July 1946 to February 1947, Jim worked as a lathe hand at Powell Valve Company.  On September 7, 1946 he married Virginia L. Short.  He then worked as an arc welder for the American Laundry Machinery Company until May 1948.  He then sold life insurance for the Virginia Life Insurance Company until March 1950.  For the next six years, he drove a truck for Flanigan Drayage.

Jim joined the Cincinnati Police Division as a Police Recruit on January 9, 1956.  On April 16, 1956, he was promoted to Patrolman, issued Badge 66, and assigned to District 2 (314 Broadway).  He was rotated to District 6 (3295 Erie Avenue) and District 7 (813 Beecher Street) during 1957 and 1959, respectively.  During 1963, Patrolman Combs transferred to the prestigious Traffic Bureau.  On July 11, 1965, he was promoted to Sergeant, having finishes 2nd on a competitive exam for that rank, issued Badge S-56, and reassigned to District 7.  He was rotated back to District 2 during 1966.  During January 1968, Sergeant Combs transferred back to Traffic Bureau.  On November 5, 1972, he was promoted to Lieutenant, issued Badge L52, and assigned to District 1 (310 Lincoln Park Drive).  Two months later, Lieutenant Combs returned to Traffic, this time as the Traffic Section Commander.  Lieutenant Combs retired September 6, 1980 with 36 letters of appreciation and/or commendation, including six from police chiefs.

Lieutenant Combs then took a position as Police Academy Commander at the Great Oaks Career Campuses.  Commander Combs finally retired in the mid-1990s with 42 years of service to his country, city, and Greater Cincinnati.

Visitation and funeral services for Lieutenant and Mrs. Combs were held on Saturday, May 15, 2021 at Clough United Methodist Church in Anderson Township.

Memorials may be made to Shriners Children’s Ohio.