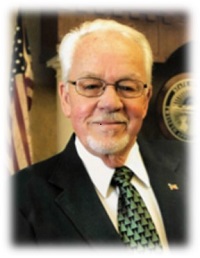 Byron was born November 9, 1929 in Tulsa, Oklahoma to Archibald and Anna (Rose) Johnson.

He joined the United States Army and served in the military police during the Korean War.

Bryon joined the Middletown Police Department during April 1958 as a Patrolman.  He was later promoted to Detective and also served as Middletown’s polygraphist.  Detective Johnson retired during January 1985.

From there, he served in the 12th District Court of Appeals and retired again with more than four decades of service to his country, community, and state.

Detective Johnson was a founding member of Big Brothers/Big Sisters of Middletown.  He served on the City Zoning and Mental Health boards and the Board of Trustees at his church.  He was also a member of the Free and Accepted Masons Jefferson Lodge #90, Antioch Shrine, and was appointed a Kentucky Colonel.

Detective Johnson died on Thursday, February 4, 2021 at the Atrium Medical Center.  He was 91.

Private services will be held at the convenience of the family.