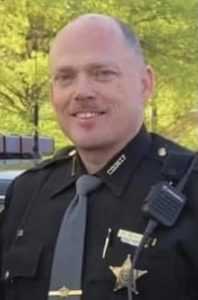 After high school, he worked as a carpenter’s assistant at Best Panel Homes until March 1986.  He worked at Kroger in Harrison until June 1987.  Then he worked until April 1988 at Carolina Cabinets in Miamitown.

On April 12, 1988, Phil joined the United States Navy.  He served aboard the Spruance-class destroyer, USS Thorn, and guided missel frigate, USS Fahrion.  He attended Electronic Warfare “A” and “C” School and the Military Police Academy.  He then served as a Patrolman at Yorktown Naval Station until March1998 and was honorably discharged.

Phil worked for the Wackenhut Corporation in West Chester, then at Hamilton County Human Services at 222 E. Central Parkway.

Phil then joined the Hamilton County Sheriff’s Office December 10, 1998, he was promoted to Patrol Clerk on January 30, 2003 and graduated from the Basic Patrol Academy March.  He was appointed Patrol Officer in the Patrol Division on April 24, 2003.  He resigned on April 6, 2012 with 22 years of service to his country and county.

A graveside service with full military honors was held on Friday, January 29, 2021 at the Miamitown Cemetery.