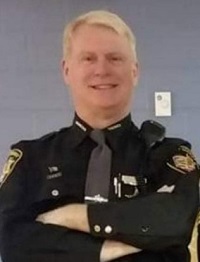 Frank was born February 28, 1960 place to Frank J. and Claire (Schroeder)Klar, Sr.  He attended St. Martin School and La Salle High School where he participated in the Audio-Visual Club and graduated in 1978.

After high school, Frank joined the United States Army in 1978.  He was honorably discharged in 1981.

He joined the Hamilton County Sheriff’s Office as a Corrections Officer about 1984.

During 2020, Deputy Klar was diagnosed with stage 4 pancreatic cancer.  He had hoped to return to work, but by September 2020 he realized he would have to retire in November.

He then was appointed as a Special Deputy and was recently promoted to Corporal.  During August, Corporal Klar was recognized by the Rotary Club of Cincinnati for 37 years of superior achievement.

He was predeceased by his father.  Deputy Klar is survived by his mother, aunts, uncles, cousins, and friends.

Memorials may be made to the American Cancer Society or Hospice of Cincinnati.